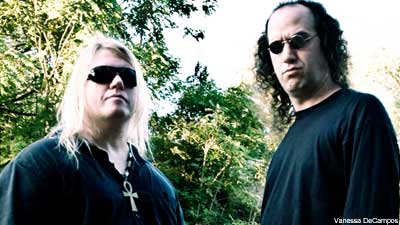 In this age, where speed often trumps talent and melody, metal musicians are feeling pressure to noodle faster. And even for a virtuoso like Nile guitarist and frontman Karl Sanders, the burden to go balls-to-the-wall was there during the writing and recording of the Egyptian-themed technical death metallers seventh LP, 'Those Whom the Gods Detest,' which hits stores Nov. 3. And one of the fastest, heaviest and most punishing tracks on the disc is 'Utterances of the Crawling Dead.' Noisecreep is proud to bring you an exclusive first listen of the track. So, was there pressure to put the pedal the metal ... so to speak?

"There's always pressure," Sanders tells Noisecreep. "Metal is a very male centric kind of art, which is definitely competitive in spirit. Harder, faster wins. But the stuff on the new Nile record ... there is some stuff that is faster than we've ever gone before, but I think we put the focus on this record on the songs we were writing, as opposed to necessarily focusing on just speed for the sake of speed. We didn't do anything like that on this record. I do have to warn you: there is some ridiculously f---ing fast s--- on this record. But it wasn't what we were thinking when we were writing. We were definitely focused on making songs for the listener this time."

Sanders, who says Nile will be touring the states early next year with Immolation, Krisiun, Abigail Williams and Dreaming Dead, provided Noisecreep with some insight into the new disc, which features imagery of Akhenaten on its cover, leading some to surmise it was the Egyptian Pharaoh whom the album's title references. Not so, Sanders says.

Listen to 'Utterances of the Crawling Dead'

"Akhenaten is famous -- or infamous -- for being the heretic Pharaoh," Sanders explains. "He did away with the entire old pantheon of Egyptian gods and instated his own brand of monotheism to one sun god, the Aten, and he was the only one to be worshipped. So, probably all these gods who'd been disposed, they probably didn't like him at all.

"But," he continued. "We are all those whom the gods detest. Me, you, everyone in the metal-listening audience. I don't think God likes heavy metal music so much, but we listen to it anyway, so I don't think necessarily God or any god is really appreciating that so much. So really, the album is a statement of defiance and self-will. You can't tell me what to do is the theme here."

To pre-order Nile's 'Those Who the Gods Destest,' and you really should, head to Nuclear Blast's online store, where the LP is selling with and without an exclusive T-shirt. This is one of those records that'll end up making everyone's year-end best-of lists ... trust us.