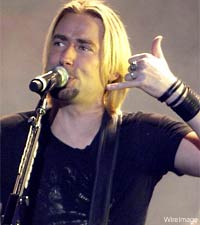 Amid the patriotic fever ignited by the Winter Olympics, one of Canada's national treasures was dealt a staggering blow today when an inanimate pickled gourd officially racked up more Facebook fans than Canuck arena rockers Nickelback. The fan page asking the question 'Can this pickle get more fans than Nickleback?' was answered with a resounding 'yes' by more than 1,416,000 people, leaving roughly 1,414,000 Nickelback fans in the dust. It's unclear whether the pickle's supporters misspelled 'Nickelback' simply to add insult to injury, but the group's ever-expanding comments section makes one thing abundantly clear: However you spell it, a whole lot of Facebookers dislike that band.

While silliness and vitriolic dislike are the coin of the social media realm, it's usually hard for campaigns of this type to make themselves heard above the noise. Yet the pickle page's growth rate -- it started on Feb. 3 -- was more akin to high-profile political movements like the popular 'I bet we can find 1,000,000 people who support same sex marriage,' which gained over two million members over a similar span. All of which leads inevitably to questions about why Nickelback, in particular, have incurred the wrath of so many.

In the wake of the pickle campaign's resounding success, several inanimate-object-versus-popular-band fan pages have popped up on Facebook. Future showdowns include a gummy bear taking on Miley Cyrus, a corn dog that has apparently set its sights on Coldplay and countless others.