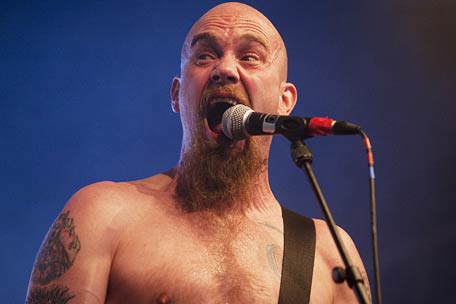 Good news for Queens of the Stone Age fans who were already psyched about the fact that Trent Reznor and Dave Grohl would be lending their immeasurable talents to the new album. Former bassist Nick Oliveri, who was booted from the band by singer/guitarist and longtime cohort Josh Homme back in 2004, has laid down vocals on a brand new song.

The news was posted on the Mondo Generator Facebook page. Those who follow Oliveri's musical exploits –we won't further mention the standoff he had with the authorities after a domestic dustup in Los Angeles- are aware that he sings and thwaps the bass in Mondo Generator. It's not that much of a shock that Oliveri is contributing to QOTSA, since Homme appeared on a song from Mondo Generator's Hell Comes to Your Heart earlier this year.

Nick has re-joined Kyuss, and has recently recorded his vocals on a new Queens of the Stone Age song! Stay tuned.

As you can see, a second bomb was dropped, in the Facebook update and that's the fact that Oliveri has rejoined Kyuss Lives! which features other members of the beloved desert rock band Kyuss, like singer John Garcia, but not guitarist Homme. Oliveri bolted earlier this year when the once and former members began duking it out in the courts over the name. He wanted to avoid the drama, but he's back.

The new QOTSA album, featuring an appearance from Nick Oliveri, is due in June 2013.

Watch 'Go With the Flow' Video