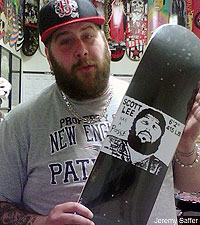 The New England Metal and Hardcore Fest is entering its 12th year of headbanging and moshing in 2010. The annual fest, held this spring at the Palladium in Worcester, Mass. April 23 and 24, is a can't-miss event of the metal calendar year. The fest has gone through many incarnations -- two to three nights, three venues -- but this year will be two nights, with a Thursday night, Atticus-sponsored pre-party on April 22, and two stages. Festival founder Scott Lee chatted with Noisecreep about his top NEMHCF moments.

Five favorite moments: "DragonForce's first time on American soil. The return of Overcast. Lamb of God playing at 1 AM one year. All That Remains playing when they were no one ... and then headlining. Those are the memories I love, and it's like watching your kid grow."

Worst moment: "The power going out one year for hours and hours. I try and forget that scenario, so I don't remember what year it was [laughs]. Blood Has Been Shed was supposed to headline the second stage, and [singer] Howard Jones had to take a flight, so he couldn't wait around for the power to come back on. And we had to keep everyone out of the building. The staff handled it perfectly, but a grid went down, killing a three block radius of power."

One band who hasn't played NEMHCF that you want to play: "Slayer. We're trying to get them. Maybe for the 15th year. We are already planning on going to 15. We have to get there. We got to 10! If we get to 15, then we'll get to 20. I am going to go till the Palladium burns down."