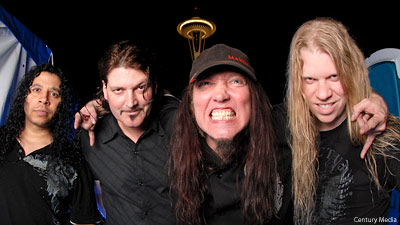 Half adecade has passed since Seattle progressive metal masters Nevermore released 'This Godless Endeavor.' The years have been agonizing for the band's ardent fans, but now the wait is almost over. On June 8, Nevermore will release their seventh full-length studio album, 'The Obsidian Conspiracy.'

"It's a mysterious beast -- vicious and beautiful," frontman Warrel Dane told Noisecreep. "It's definitely different than 'This Godless Endeavor.' Some of it is really fast and crazy. When we first started demoing these songs, I asked out guitarist, 'Are you trying to kill our drummer?' because he was coming up with these amazing thrash parts that were just relentless. But then other songs are totally different. It's beautiful, disgusting and so melodic at times."

Nevermore wrote the album during much of 2009, then they teamed up with Soilwork guitarist Peter Wichers, who also worked on Dane's 2008 record 'Praises to the War Machine.' In August, Nevermore recorded drums at Robert Lange studios in Seattle ("That's where, in 1995, we did the original Nevermore song on the first album"), then they moved to a cabin in North Carolina to track the rest of the album. And while they knew their parts going in they improvised in the studio to keep the songs sounding fresh and vital.

"When we're playing our parts, we're working on them up until the moment they're recorded,' Dane explained. "I always leave a few parts to be spontaneous and maybe write some lyrics in the studio or come up with melodies off the cuff."

Metal veteran Andy Sneap (Megadeth, Arch Enemy) mixed 'The Obsidian Conspiracy' and Travis Smith (Amorphis, Opeth) created the cover art, which depicts a forked-tongued boy facing a long-haired man in a white mask. Between the two is a body of water and an obelisk resembling the Washington Monument. The cryptic, beautiful imagery is the perfect compliment to the band's complex, multifaceted music.

"I listen to all kinds of death and black metal, and I love that s---, but I also love a good melody and I think that's something that's really missing in a lot of music today," Dane said. "Granted, kids want to hear guttural vocals, but I think we're one of the last few bands that are still mixing melodies with music that's semi-extreme."