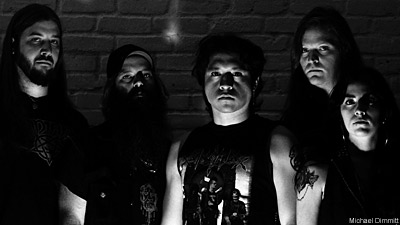 Mutilation Rites' Michael Dimmitt knows a thing or two about black metal. He may not have written the book -- 'Lords of Chaos' more or less cornered that market -- but he helped make the movie and metes out some of the most punishing riffs this side of the Brooklyn Bridge in doomy black metal assassins Mutilation Rites. He's also got more cred than you can shake a spiked bat at, as the dude spent several years living in Norway working in the music industry there, seeing much of the early '90s infamous black metal mayhem unfold.

Dimmitt reminisced about his years spent in Oslo's rock 'n' roll underground to Noisecreep, recalling, "One of the most noteworthy shows was Mayhem at the Rosklide Festival in 2001 in Denmark. Me and my buddy had all-access passes for this huge five-day event, so after we saw Mayhem tear it up on one of the seven stages in front of 2000-plus in the late afternoon, we were hanging with them backstage."

Dimmitt continued, "They had just returned from a U.S. tour where Maniac had broken his arm. Spacebrain, their stage and costume designer, had created a special sort of Freddy Krueger cast for him to wear with five sharp knives projecting out of it. After the show, Maniac was wasted on wine, all bloody and belligerent. He had lost his all-access bracelet to get into one of the limited-access areas, and he was still wearing the Freddy Krueger cast with the knives when he tried to pass by security."

Apparently, the security guy from the festival was checking wristbands and was quite startled when instead of a wristband on Maniac's arm, he discovered the knives on his cast. Dimmitt said, "Watching five security guards figure out how to subdue a drunken, corpse-painted Maniac with that deadly cast on was hilarious. They are much better now with Attila. It's a more serious show now, but Mayhem always did entertain. The first Inferno Fest in 2001 was pretty cool. My old band, Burning Rubber, was one of two bands that weren't black metal in the whole festival. Gehenna, Enslaved, Cavader Inc. and Red Harvest impressed me the most at that show. But like I said earlier, this was a pretty low point for the scene with so many copycat bands. I was more in the punk and rock 'n' roll milieu back then."

He mentioned the punk vs. metal mentality he'd found there -- sounds like Sargent D's message of 'United Forces' hadn't crossed the pond quite yet. The dodgy political stances that have long haunted black metal's chapel had just begun to take root, including the stain of National Socialism.

"When I lived to Norway, I ran a recording studio and did live sound. I had to deal with everyone," Dimmitt explained. " I was like the one American in Oslo in the music scene. The punks over there are really politically active, which I think is great. Squats, getting involved in international struggles. You can actually have a demonstration over there against the cops and win.

"The problem was that a lot of those punks were the holier than thou types. I was doing sound for my friends' band called Life but How to Live It at the famous punk house in Oslo called Blitz for their 20-year anniversary. This is one of the most popular and old school punk bands ever in Norway playing their first show in like eight years. I was their sound guy because they were my buddies."

Dimmitt was drinking a Coca-Cola and he admits he doesn't "drink that s--- anymore, but at the time I did. The holier than thou political punks almost kicked me out and didn't let me mix my friends because of a bottle of Coca-Cola. It was ridiculous. That's an example of being political to the point of stupidity. That was one extreme. The other extreme of course is racism, Nazism. Some of the black metallers embraced this stuff. Some really meant it, the whole National Socialism thing, Norway for Norwegians stuff. Others just did that stuff to provoke. I just tried to stay out of politics."