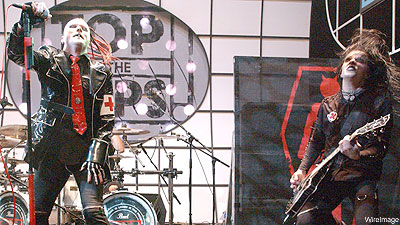 Pictures don't lie. And neither does Joey Jordison, Slipknot's imposing drummer who is firmly entrenched in the recording process for 'Women and Children Last,' the forthcoming disc from his side project, Murderdolls; the band was recently revived, as Slipknot takes some time off. According to the band's MySpace page, they've got a rather Motley guest appearing on the new disc.

In a post titled 'Mars Attacks,' the band reveals that Mötley Crüe's Mick Mars, who is planning a solo album of his own, stopped by the studio to contribute his guitar talents to the new disc. No additional details have been revealed about Mars' guest spot, but the post does contain a picture of the band working with the Motley legend.

In a recent interview with Noisecreep, Jordison explained that the new disc may catch some people off guard. "There are definitely things on the album that will surprise people," he says. "The main difference between the new album and our debut is the songwriting process. Wednesday and I actually sat in a room together and wrote this stuff out together. We worked everything out together, and in the past, that was definitely not the case. I can't wait for people to hear what we've come up with."

Jordison added that returning to Murderdolls was always on his to-do list. He was just waiting for the right time to bring the band back.

"I might have been away from the band, but it's always been on my mind," he said. "Since the last Murderdolls show all of those years ago, I've been keeping busy with so many different kinds of projects. Slipknot took the most time, but that's obviously my main priority. We toured 'All Hope Is Gone' for 18 months. I also played with Ministry, Korn and some other projects. But through all of that, I knew I wanted to do another Murderdolls album."