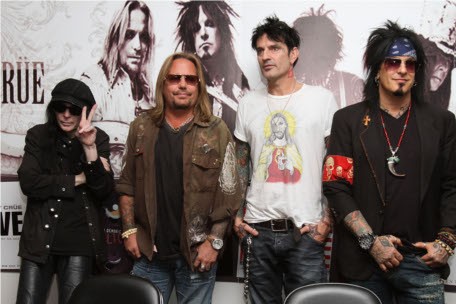 A truck carrying around $6 million worth of equipment for Mötley Crüe was involved in a road accident yesterday (Sept. 5), spilling its contents all over the highway. The truck was heading to the band's stop at the DTE Energy Music Theatre in Clarkston, Mich. for the Crue's current tour with KISS. The incident happened at about 8:20 a.m. near the city of Lima, Ohio.

The driver, Charles Lamb, told the authorities that he lost control of the vehicle as he reached for a bottle of water. After attempting to straighten the truck out, he veered into a ditch. The driver was cited for failure to control a vehicle and taken to a local hospital where he was treated for non-life-threatening injuries.

Due to the accident, the Wednesday KISS/Crüe show has been moved to tonight (Sept. 6). [Blabbermouth]

Norwegian metal "It" band Kvelertak are currently in Godcity Studios in Salem, Mass., recording with Converge's Kurt Ballou. The band commented on how the process is going, saying, "All we can say is, this album is going to fuck the first album in the ass. Hard." Wow, Kvelertak, tell us how you really feel! The band will hit the road for its first ever extensive tour of the U.S. this October, riding sidecar with Converge and Torche. In the meantime, watch the studio video below.

American Head Charge have dropped their new single 'Sugars of Someday.' It's being offered via sliding scale, where fans of the Minnesota mob can choose the price of the download. All proceeds from the download will directly fund the band's next album.

Guitarist Karma Cheema said, "This was a song that Chad [Hanks] had written during the time Head Charge was in limbo; we actually had three different singers put vocals on it prior to Cameron [Heacock] coming back. During the first rehearsal, we were working with Sin while Cam was out in the car demoing stuff on his laptop. Unbeknownst to us, Cam wrote the vocals almost immediately and came in to play it for us and asked 'What do you think about this?' We were all pretty blown away. It's more of a radio song than we've ever written, not by design, that's just the way it came out. We're at this kinda weird interim between the past and present of Head Charge, and this song was written right in the middle of all that."

Cheema continued, "We know it's a departure but we're very proud of it, however, it's in no way indicative of what's coming. We're not planning to make a whole record of songs that sound like this, but 'Sugars' captures a moment in time for a band that had kinda lost its way. The magic of Head Charge, really, is the core members doing what they do together, and 'Sugars' is the first time since we wrote 'The Feeding,' that we had a great representation of that. "

The Sword will hit the road on a 37-date U.S. tour in support of Apocryphon this fall. They will be supported by Gypsyhawk. Dates are below.