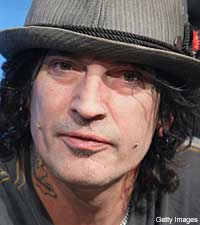 Mötley Crüe's Crüe Fest 2, the hard rock marathon featuring the classic metal band in the headlining spot, made its way to Holmdel, N.J.'s PNC Bank Arts Center on Aug. 18. Now in its second year, the festival came with the promise of seeing Mötley Crüe celebrate the 20th anniversary of 'Dr. Feelgood' by performing the standout album in its entirety -- as well as the disappointment of seeing a drummer other than Tommy Lee behind the set.

While Lee's presence was missed, Mötley Crüe delivered a performance of demented fun, tearing through timeless cuts like 'Rattlesnake Shake' and 'Kickstart My Heart' while backed by a dizzying light show and sanitarium-esque stage setup. Lee manned the drums for slower songs 'Without You' and 'Time for Change' -- and handed out a bottle of liquor to the adoring crowd.

Vince Neil's high-pitched squeal was as commanding as ever, but the performance's anchor was guitarist Mick Mars, who let out a scorching solo during an extended interlude. Following the completion of 'Dr. Feelgood and another set change, Crüe wrapped up with classic anthems 'Wild Side' and 'Shout at the Devil.'

Earlier highlights of Crüe Fest 2 included Godsmack, whose set focused on well-known rockers like 'Straight out of Line' and 'I Stand Alone.' Singer Sully Erna addressed the band's recent hiatus, telling the crowd that "rumors that this is the beginning of the end for us" were "bulls---" before launching into punishing their latest single, 'Whiskey Hangover.' Godsmack's hour-long set was also marked by impressive onstage pyrotechnics and an elongated drumming duel between Erna and Shannon Larkin.

Theory of a Deadman played a short set that featured tracks from latest album, 'Scars & Souvenirs,' with frontman Tyler Connolly whipping out a camcorder mid-set to film his screaming fans. Drowning Pool also delivered a high-octane show consisting of singles '37 Stitches' and 'Bodies.' Cavo and Shram both gave hardcore performances on the Monster Energy side stage, and Rev Theory headlined the stage with an assault of complex guitar arrangements. Crüe Fest 2 will continue across the east coast this summer, before ending in Darien Lake, N.Y. on Sept. 5.