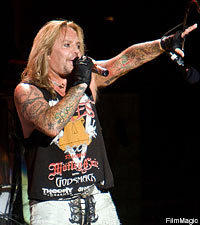 "It's a blast. We're having the time of our lives!" exclaims John Allen of Charm City Devils when questioned about playing Crüe Fest 2.

Picture it: Thousands of sweaty bodies, shoved together in an air tight room, everyone sloshing in spilled beer. As the beer dries, feet are literally stuck to the floor, making it nearly impossible to move. For about seven hours, rock fans endured this messy experience for a chance to catch Crüe Fest 2 live in Las Vegas, Nev. After all, there's no better place than Sin City to catch Mötley Crüe. The Joint at the Hard Rock Hotel and Casino in Las Vegas housed the raucous event on Aug. 1.

As with any touring festival, the earliest acts get the least amount of time. Still, Baltimore's Charm City Devils use their allotted 30 minutes to their fullest abilities. The band -- discovered by Crüe bassist Nikki Sixx -- is touring behind the debut album 'Let's Rock 'n' Roll.'

The guys in Drowning Pool are Eleven Seven labelmates with Charm City Devils and Mötley Crüe. Drowning Pool haven't had the easiest rock 'n' roll story, but the band continues to plug along, making records and winning over fans on the road.

For their amazing energy, most fans in the crowd were thankful. Drowning Pool gave their all, and not just on the better known songs like 'Bodies.' Of course, it isn't all glamorous for Drowning Pool on tour. While in Vegas, the band endured unpleasant conditions while waiting on their bus in the Nevada heat. Temperatures were so high on show day, the air conditioning inside the tour bus just couldn't keep up ... meaning band members were suffering ... and sweating.

"On this tour was had our choice of getting the slide out ... or the shower," Drowning Pool guitarist C.J. Pierce explains. "We went with the slide out. There's a lot of sweaty, smelly days where you really reconsider that choice."

Theory of a Deadman lead singer Tyler Connolly struggled through much of the band's set. His voice was shot, but the band earned an 'A' for effort. A strained voice sort of put the drain on the energy of the night, though. It was evident to everyone that Connolly was suffering -- but the show must go on! The band slogged through their best-known tunes and woke the crowd up with 'Hate My Life.'

Then it was all about the drums for Godsmack. 'Whiskey Hangover,' 'Voodoo' and 'Keep Away' were the order of the day. Well, those tunes and some crazy drum dueling solos starring Shannon Larkin and Sully Erna. Think synchronicity and you've got it -- except for the time Erna tossed his sticks in the air, failing to catch one. It happens. No matter the tiny snafu, the band kicked the crowd's collective ass.

And then it was Mötley Crüe time. Most people into rock have seen the Crüe live at least once. The band knows this and continues to look for ways to market concert tickets to repeat offenders. This go-round, Mötley Crüe were performing all of 1989s 'Dr. Feelgood,' top to bottom. To Mötley's credit, there's no cheating: Yes, 'Dr. Feelgood' is played first, and duds like 'Time for Change' are allowed a spot on the set.

Speaking of set -- when you have money, you can do big things. Roadies scurried to change the stage in rapid time after Godsmack, transforming the bare bones backdrop into a morbid, near-defunct hospital. Suddenly, out pop some naughty nurses, a deranged lunatic in a straight jacket ... and Mötley Crüe singing in a padded room. It just works.

After performing all of 'Dr. Feelgood,' the boys hang out for awhile, playing some of their most famous songs, ending with 'Home Sweet Home.' Is there any other option?