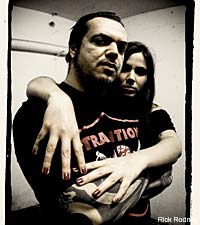 The first question Sepultura and Cavalera Conspiracy fans will want to know -- will they like Mixhell, the electronic project drummer Iggor Cavalera formed with his wife, Laima Leyton?

"I don't know," Iggor laughs. "I really enjoy it, because for me it's still very, very extreme. My drumming is very energetic. It just has different grooves to it than what I do with Cavalera."

Iggor, who formed the Brazilian metal band Sepultura with his brother, Max, in 1984, left the band in 2006 (Max left a decade earlier), and also plays with Max in Cavalera Conspiracy. In Mixhell, Iggor still plays live drums while Laima is the DJ.

"It's a bit heavy, but it has a lot of flavors in it, and it's not 100 percent that he's always on the drum set," says Laimi. "He comes and goes from the sampler to the drum set. So whenever he's on the drums, it generates a lot of energy. Really strong. It's like a momentum of the show so it's really nice. Sometimes, he's just straight beats and disco beats and sometimes he does like tribal beats."

In the three years since Mixhell has been on the scene, the pair has worked with electronic heavyweights Soulwax, Justice, MSTRKRFT, Diplo, James Murphy and Busy P, and they sold out clubs in South America and Europe. Mixhell just wrapped up a North American tour.

The couple are working on a release for the spring.

"We're still deciding if we're going to have the full-length album or an EP with some remixes, but for sure something is going to come out," says Laima. "We're going to be going into the studio with Buraka Som Sistema. We just finished a track with Soulwax and Crookers, and we're going to do one with Crookers and Soulwax for the album as well. So a lot of collaborations coming up."

"That's my vibe on it because it's really cool to collaborate on it, especially when you're dealing with friends," he says. "It's a lot of fun especially on this whole file-exchange thing. It's always a surprise when you get something back. Of course, being in the studio all together, it's also very cool. You have instant ideas going on and it's way faster."