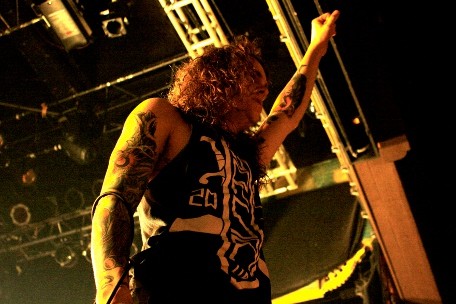 As if it isn't enough to be the frontman for one of the country's hottest metalcore bands, Miss May I's Levin Benton also find time to sit atop his own mini-clothing empire - Vursa Limited.

As he states on the company web site: "The idea began a long time ago. Not the idea for a clothing company but the idea to express myself. Ever since I could remember I wanted to do something out of the normal day persons life and I was raised knowing I could be anything I want. Now I find myself in the international touring metalcore band Miss May I. But before this I found myself interested in art and thinking outside the box. I always worked on ideas and always had a sense of style different from others.

Whether it be crazy colored hair or a ridiculous amount of layers I always seemed different. Wanting to pursue this I started to look for a art college in Ohio and started lining myself up for my future. But getting signed in high school and on my way to becoming a college student definitely wasn't in my plans. So after I graduated high school I began touring the world and put my art interest on the back burner.

But after seeing the world and all the culture I was missing out on I couldn't hold it back any longer. So winter of 2010 I created this idea to have a line that was a blend of all the culture and fashion I have seen around the world along with my own little spin on things." 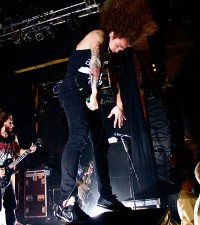 As Benton told Noisecreep during a chat in Florida where the band was making a stop on the No Guts, No Glory tour, co-headlining with Pierce the Veil, sometimes it gets a little crazy
overseeing his company. Miss May I's most recent album, 2010's 'Monument,' was a big success and helped the Troy, Ohio band became one of Rise Records' hottest artists.

"I'll be going on stage and there will be a conference call happening or something," he laughed - "So I do end up juggling quite a bit. But it's cool. I love designing the clothing and I stay really involved with everything as far as how things are made, customer service - everything. And my girlfriend is amazing with everything, too, she helps a great deal - we're having a lot of fun."

No doubt things will be even busier for the band who will be joining some high profile tours in 2012 after working on a new album in January. But Benton will also stay focused on Vursa Limited.

"I feel really lucky to be able to do all that I'm doing. The clothing is a real nice extension from the music."

Check out Miss May I on the No Guts No Glory tour along with Pierce the Veil, Woe, Is Me, The Amity Affliction and letlive.

Filed Under: miss may i, MissMayI
Categories: Interviews, News
Comments
Leave A Comment
Back To Top