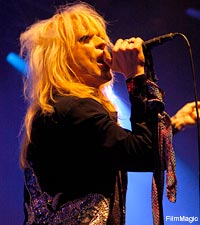 When Hanoi Rocks formed way back in 1979, there's no way lead singer Michael Monroe could have predicted all that would happen to the band over three decades. The band played farewell shows in April 2009, and now the members are working on their respective solo careers. With so much history, influence, success and tragedy spread amongst the band members, it would be easy to assume the break up was painful. Not so, says Monroe.

"It wasn't really such a hard decision [to disband]," Michael Monroe tells Noisecreep. "It just became inevitable over the last couple of years of the band's existence. It's not that emotional for me. I'm glad that it's behind me and that the band finished in style."

All told, Hanoi Rocks played eight sold-out farewell gigs. Critics credit Hanoi Rocks with ushering in the glam metal movement of the 1980s. Most of that is due to Monroe's flamboyant stage presence. For Monroe, though, it all begins and ends with Little Richard -- the man he credits as a major influence.

"He defined rock 'n' roll to me," explains Monroe. "His amazing sound, songs, voice, rebellious attitude, stage presence, looks, individualism, sense of humor ... Also, back in his early days, for having to fight the system that tried to stop him and actually winning. Basically his pioneering career, unlike any other, just makes him the rock 'n' roll hero of all time."

But all that is the past. For now, with a new year and new decade just starting, Monroe is excited about focusing on his solo work full time. "It's been a long time since my past solo stuff, and I'm now in a different situation with more years of experience behind me. I'm also working with some new people as well as some old friends. And those friends have also grown and evolved over time, so a lot remains to be seen at this point as far as the music is concerned, which is exciting."

Monroe says 2010 will be more "rockin' than ever" thanks to a new backing band, album and tour. Right now, no live dates have been announced.