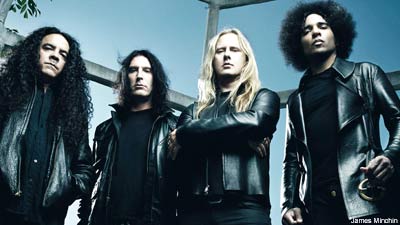 Metallica and Alice In Chains together sounds more like it's more fitting for a dream musical collaboration than a breezy interview session, but James Hetfield and Lars Ulrich recently got together with Jerry Cantrell, Sean Kinney, Mike Inez and new vocalist William DuVall while both bands were playing the Sonisphere Festival at Knebworth.

The FMQB Productions radio special 'Inside Alice In Chains: Black Gives Way to Blue' was an hour long radio special, but Noisecreep is presenting exclusive segments from the radio special. In this segment, the band talks about the album's title, the song it takes it from, and Sir Elton John, who plays piano on the title track.

The band decided unaminously to name the album 'Black Gives Way to Blue' after the last song on the album. "It's a really intense song, and a really open-hearted song to Layne and the experience that we went through," Cantrell says to Hetfield and Ulrich about the title track. "Facing up to all of that stuff, and owning all the good, and owning all the bad, and moving forward together. It was a lot of big steps ... things were pretty black for us. It's pretty literal to that, and things are starting to get a little lighter."

Listen to 'Inside Alice In Chains: Black Gives Way to Blue' Part One

Hetfield tells the band he "sunk right into" the title track immediately, as did Elton John, who connected with it and agreed to perform on the song. That meant a lot to Cantrell, who grew up as a fan. "My whole journey starts with him," he says. "That was the first guy I ever really got into and figured out I wanted to do this. Then I started discovering guitar bands like AC/DC and Kiss, but that was the first thing that turned the light on. For that to come full circle ... it's a pretty heavy thing. It's one of the few moments in life where the universe lines up and you feel like you're doing the right thing."

Find out what metal bands Elton John likes and his suggestions about the recording of 'Black Gives Way to Blue' by listening.