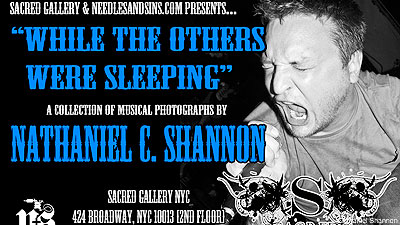 Metal and rock photographer Nathaniel Shannon will showcase shots in a new gallery exhibition, 'While the Others Were Sleeping,' which opens April 3 in New York City. The exhibition feature artists like Henry Rollins, Dillinger Escape Plan, Eyehategod, Gwar, Pentagram and others. "'While the Others Were Sleeping' is a collection of music photographs from many late nights spent traveling around the country documenting some of my favorite bands, while everyone else was having kids and making the world a lamer place," Shannon told Noisecreep.

The photographer says his favorite photo of the whole exhibition is a sanguine shot taken of Dillinger Escape Plan guitarist Ben Weinman at The Chain Reaction in Anaheim, Calif ."I was out on tour with Jeff Tuttle's other band from Detroit, Heads Will Roll, whom were opening," Shannon said, referencing DEP's guitarist Tuttle. "About 45 seconds into the first song, Ben ran up the wall to jump into the crowd. The PAs at the venue hung from the ceiling, and he smashed his head on it. Blood went everywhere. Dudes got boners. Chicks screamed. And he played the rest of the show, because that dude is a beast. The shot was him on the couch in the green room after their set, blood dropping down his head. It is one of the best things I've ever seen."

Another -- albeit less bloody, but equally thrilling -- favorite is his shot of Goatwhore, from Phil Anselmo's humble abode of horrors, The House of Shock in New Orleans. "Not only are they one of my favorite bands and some of best dudes ever, but I was able to shoot them at The House of Shock while it was closed for the season, which was amazing getting to run around self-guided," Shannon said. "It was pretty gnarly and everyone that works there rules. Though it rained, fortune was on our side, as the pyrotechnic guy shot off some fireballs for us, which are in the photo! Not to mention, [there is] a naked chick covered in blood. If you go to the bar across the street from their practice space, there is an old dude with one eye whose name is 'Popeye.' No joke."

Shannon cops to a diverse musical palette, having been raised on Al Green and Simon and Garfunkel. But he digs the metal. "I've played music my whole life, so I keep a pretty open mind," he said. "As long as something has heart, I can get into it. I shoot a lot of metal and heavier jams because for the most part, the people in the bands rock out more, which is visually more interesting than more mellow stuff and allows a larger dynamic to photograph. How many photos can you get of a person standing in the same place for 45 minutes?"