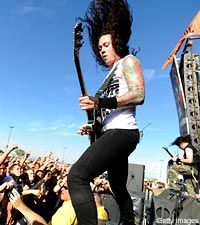 This year's installment of the Rockstar Mayhem Fest has no shortage of variety and big names. With a line up that includes heavyweights like Marilyn Manson, Cannibal Corpse, Killswitch Engage, Behemoth and the mighty Slayer, it's going to be next to impossible for the tour's promoters to top themselves next year. Noisecreep was at the July 12 stop in San Bernadino, Calif. and we spent the entire day filming interviews to share with you all.

In this first installment, we asked the various musicians what kind of food they were eating on the tour. Something tells us that The Black Dahlia Murder's Trevor Strnad's choice of a grilled cheese sandwich with bacon stuffed inside isn't exactly the kind of thing a nutritionist would advise a touring musician to be eating. On the other side of things, Slayer's Dave Lombardo's culinary picks are a bit more refined with decidedly un-metal words like "sautéed" and "arugula" being thrown around.