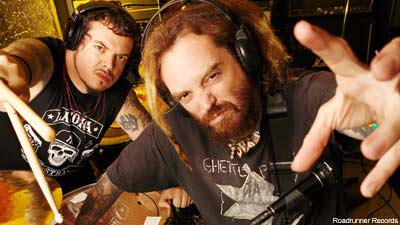 In 2007, Soulfly frontman Max Cavalera and his brother Igor formed the side project Cavalera Conspiracy and released the urgent, thrashy 'Inflikted' the following year. The project marked the first time the siblings had worked together since 1996, when Max left Sepultura, the band they formed together as kids in Brazil. A bitter decade long feud followed before the brothers reconciled their differences and started working together again.

"I think maybe we shouldn't have released them at the same time," Max tells Noisecreep. "I really like what we did on that album, and maybe we should have spent more time before coming back out with Soufly."

The bad news for Cavalera Conspiracy fans is that Max and his brother have no plans to work together this year, and Soufly will likely be on the road for much of 2010. The good news is that the two brothers have every intention of working on a second Conspiracy album together.

"We're still getting together great and everything," Cavalera says. "We just played five shows in August in Finland, Japan, Belgium and the Czech Republic, which were really fun. And then on September 4 we played in Vienna, Austria and the next day we did a show in Moscow, which was crazy. The show was kick-ass and the people went crazy."

While there are no more Cavalera Conspiracy concerts scheduled, Cavalera says the band will play a few more shows in 2010 and then when Soulfly are taking a break they'll start writing songs for the follow-up to 'Inflikted.'

"It's way to early to tell what that might sound like because nothing's even written yet," Cavalera says. "But I just feel really lucky to have two bands I really love right now and to be able to make music with both."