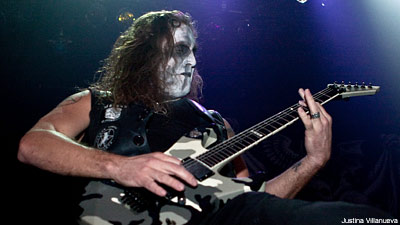 On Dec. 16 I learned that I still did't know every New York City-hailing black metal band. Dimentianon -- who opened for Marduk's U.S. Plague return show -- is not exactly from N.Y.C., but Long Island's Pine Barren section called Ridge, N.Y. is equally close to N.Y.C. as it is the perfect wilderness recipe for a black metal band. Unfortunately, I missed most of the band's set.

And with Black Anvil playing directly after them, there is no way I would be able remember anything that happened earlier in the day. How did I even get to the show? I don't know, but I do know that Black Anvil becomes more and more perfect with every show. 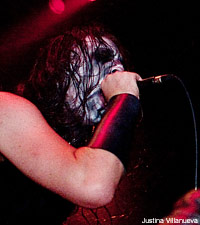 Merrimack succeeded the New York metallers with their faces drenched in corpse paint, and their energy as vibrant as a youthcore band. Towards the end of their set, Merrimack's vocalist hopped down to the photo pit and did vocals from in front of the barricade. Then, Mantic Ritual -- the only non-blackened band on the tour -- gave the Gramercy Theater crowd an overdose of exuberant thrash. While most people seemed disinterested in something that was not dark, there were a couple people whose heads swirled so hard I thought their noggins would fly away.

For many New Yorkers, the highlight of the evening was Nachtmystium's return to a Big Apple stage. With a couple canceled shows and an unshakable hype still going about them, the night mystery guys had the crowd in awe. 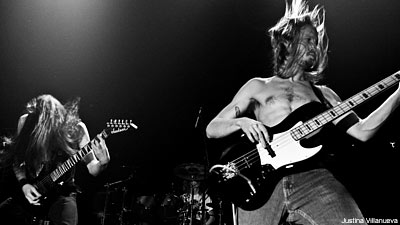 And finally, Marduk. Oh what an interesting tour the foursome has had (Bible burning turned to pepper sprayed audience, a hug gone way wrong and I'm sure a bunch of other mishaps that never made the metal press). More so, what an interesting year they've had! After planning their return after nine years, the band couldn't conquer visa issues, which prevented them from joining Mayhem on the road this summer. But anyway, there is only word that sums a Marduk set (and I'm not the only one to use it): unrelenting.

Marduk will continue to tour in 2010. Europeans can look out for them on their Funeral Nation tour starting Jan. 8 in Germany. 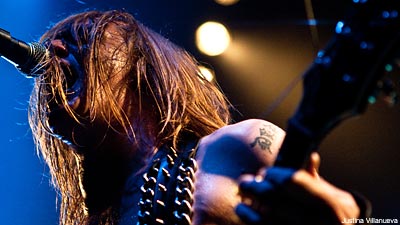