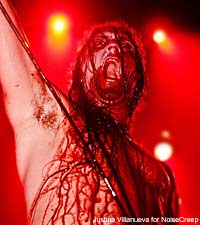 Being a Marduk fan has always been dangerous, but never has it been as dangerous as this past week. The Swedish black metallers have been touring the U.S. in recent weeks with Nachtmystium, Mantic Ritual, Merrimack and Black Anvil in support of their latest LP, 'Wormwood.' And the tour, which runs through Dec. 16 in New York, has, so far, been a treacherous affair for the band's rabid fans.

On Dec. 4, fans at Marduk's show were allegedly pepper-sprayed by an overzealous security guard. The band was playing the Royal Hall in Los Angeles when, halfway through the set, a fan began trying to set a Bible on fire inside the club. The venue's security responded, using pepper spray on the fan.

Of course, the spray didn't just effect its intended target. Several audience members were sprayed, forcing Marduk to leave the stage and sending choking fans running for the exits. After 10 minutes, Marduk returned to the stage and voiced their discontentment with how the situation was handled.

Two nights later, when the band went on at the DNA Lounge in San Francisco, an overzealous, shirtless fan made his way on stage, and attempted to embrace frontman Daniel 'Mortuus' Rosten.

In the video, you can see that, at the 1:16 mark, Mortuus grabs the fan by the head, flips him over his shoulder and towards the front of the stage. He pushed the fan off of the stage, and security rounded him up.