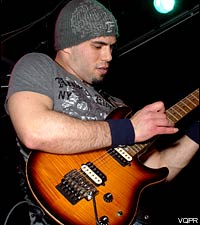 When metal guitarist Marc Rizzo plays clubs through the beginning of February, the veteran of bands such as Soulfly, Cavalera Conspiracy and Sepultura will present a retrospective of his career.

"We do everything," Rizzo told Noisecreep. "We play a lot of songs off my last few solo records and some new stuff off my new record that's coming out in January. Anyone who's ever been to the show before knows that I throw in some Soulfly songs, Cavalera Conspiracy and Sepultura. It's a mixture of everything I do."

Rizzo has once again has stepped out from his six-string tour of duty with the three bands to deliver his aforementioned album 'Legionaire,' which is available via iTunes or at his shows after Feb. 1 on Phlamencore Records. 'Legionaire' was written and recorded over a two-year period, while touring worldwide with Soulfly and Cavalera Conspiracy.

"I started the project probably two years ago, but I've been so busy on tour with Soulfly and Cavalera Conspiracy; we've gone all over the world in the past two years," Rizzo said. "I basically have been recording it when I came home for a week or two here and there in between tours. I finally got it finished now. I have December and January off, so it's a pretty good time to get it out now, finish it and do a full U.S. tour. Come February, I'll probably be out on tour again with Soulfly and Cavalera Conspiracy.

"Being that it was recorded over a two-year period, I got to think about the songs and think about the playing on it. I would do some recording, then go out on the road. The whole time I'm on tour, I would kind of listen to my record, think of things I wanted to redo and improve. It forced me to take the time to think of everything and put out the best record that I could."

Rizzo is considered a master musician with deep musical roots in metal, classical and flamenco guitar. He explained that 'Legionaire' takes his playing to the next level.

"Every record I've done now kind of shows improvement and evolution in my playing," Rizzo said. "This record, I think, shows it even more. I really worked hard on taking it to the next level."