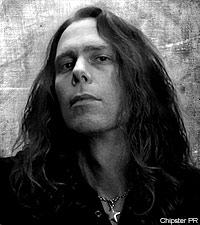 The members of Boston-based Machines of Grace have a deep metal history. The Machines of Grace family tree branches to Savatage, Trans Siberian Orchestra, Metal Church and Circle II Circle. With such a metal pedigree, it's easy to see how the quartet got sidetracked from Machines of Grace more than two decades ago. Singer Zachary Stevens, drummer Jeff Plate and guitarist Matt Leff were basically kids when they originally wrote together. Now, more than 20 years later, Machines of Grace exists again with the addition of bassist Chris Rapoza. The recording came easy the second time around, making the members think it was worth the wait. All the songs on the 2009 debut 'Machines of Grace' are from 20 years ago, but many have been reworked for modern standards.

"Pretty much what we did when we approached it now was to make it sound as current as we possibly could while still retaining the original compositions and original feel," Leff tells Noisecreep via phone from the office of his music shop in Boston. "Some of the stuff was rewritten because the lyrics didn't make sense anymore and musically I changed a lot of the things I was playing. I used different instrumentation to make it sound like it wasn't 20 years old. There's nothing that's brand new."

While this might sound like a cop-out, consider this: the songs on 'Machines of Grace' were destined for recording. During the band's "original" period, Leff, Plate and Stevens were known as Wicked Witch. Leff and Stevens were college chums and eventually met Plate. Different career paths separated the men until time intervened, making it all seem like destiny.

"I wasn't sure if it would ever get started!" laughs Leff! "Jeff and I had talked about this many, many times over the years. We always thought it would be a cool idea. We always thought there would be a market for it but he was busy and it's tough to get everybody on the same at the same time ... It didn't take that long once we made the decision to go ahead and start recording."

Despite the band's spiritual sounding name and recent tour with Stryper, Machines of Grace isn't a Christian act.

"We had spent quite a long time, looking at a whole bunch of different names. We must have gone through hundreds of different names," Leff explains. "One afternoon, I was at a Borders kinda going through all the different book titles, looking for something that would be inspirational. I saw a book called 'Mechanical Grace' and we had kind of been kicking around the word 'machines' because we thought it sounded pretty cool. I put together Machines of Grace and emailed the other guys in the band and some were really into it and some were not so into it. There were a couple other names we were also kicking around at the same time. So we put up three or four different names on some different forums online and Machines of Grace was the winner."

So while Leff admits most Machines of Grace songs are positive, it's not necessarily intentional. That's just the mood of the band these days.

'Machines of Grace' was recorded with the help of producer Paul David Hager. The band plans to tour again before the end of 2010.