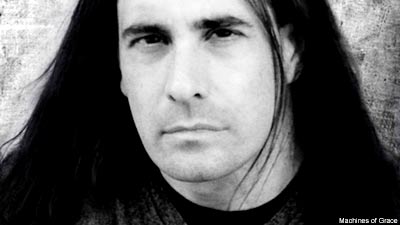 "We were originally called Wickedwitch, and we formed in 1990," Stevens tells Noisecreep. "Then we came back together, renamed the band and we have a different bass player. That's all that's changed. Three out of the four members are the same -- me, Jeff and Matt. We thought, 'These songs are pretty good. Let's give it another run and do it right.' Now that everyone's kind of done their thing for 15 years, let's put it all back together again. So we formed the new band name and just started over."

Stevens and the bunch are celebrating the release of their self-titled debut, which hit stores this summer. That sound is likewise attributed to the talents of veteran mixologist Paul David Hager, who is credited with engineering, mixing and producing studio work by acts such as Goo Goo Dolls, Avril Lavigne, Pink and Tracy Bonham.

Last month, Machines of Grace, whom Stevens calls "Boston meets Badlands," played their first live shows as a new collection. Stevens said they went over well. "We learned a lot," Stevens said. "We just film everything and critique at this point and just try to make all the improvements we can to the show. It's just like starting over after about 16 years. You gotta start from ground zero again so it's pretty wild.

"It was like going back in time playing those songs, but we found the crowds really reacted well to the songs. They really like the songs a lot. When we performed them well, the crowd went nuts. We learned they liked the songs. That's important. We just make sure we have the performance end down."

Watching tapes of performances -- just like a football team would -- has been beneficial to Machines of Grace. "That's been a practice I've been doing for 15 years," Stevens said. "We used to film the Savatage shows back in the day. We would look at them and watch and critique. 'We need to be closer here and positioning is off.' It's a thing we've been doing for a long time. You're right it's like football, you can go back and look at the film and see what happened. You don't have to film every one. But I'd say we were looking at quite a bit of video all along.

"Most of the times, the live vocals, you're either on or off. You know what I'm saying? Luckily 99 percent of the time, I'm on and pretty satisfied with it. For vocals, it can be sometimes painful to listen to that live, the sound quality just coming through a camera mic isn't very good. It's more for the visual component. That's why I don't really like going back and seeing too many of them. I can't really tell what's going on."

Touring plans have been halted for Machines of Grace because Plate is heading out on the road with Trans-Siberian Orchestra. Machines of Grace will resume road work next year. "We did all three shows in New York state," Stevens said. "We're off to a start now. Everybody can see the band now on stage and have that vision as well as the record."