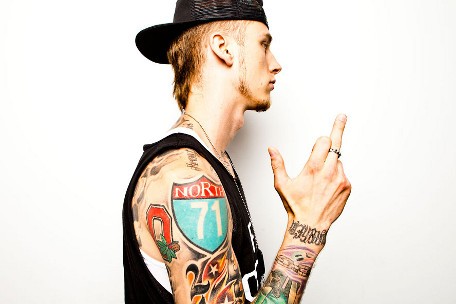 "Before I even started listening to rap music, I was really into metal and punk. I listened to Korn and Limp Bizkit and that whole era of heavy music. I was picked on a lot as a kid because of the way I dressed. Metal and punk music got me through that. I know a lot of people don't understand it, but I love metal," Machine Gun Kelly tells Noisecreep right off the bat.

It's not often we get to speak with a rap artist for the site, but here we are. First, we'll give you some background.

Machine Gun Kelly hails from Cleveland, Ohio and was signed by none other than Puff Daddy to his Bad Boy Records label in 2011. Late last year, MGK released Lace Up, his debut album. Last summer, he hit the road as part of the Warped Tour, turning a lot of the punk and metal fans in attendance onto his rugged brand of hip hop through his balls-to-the-wall live show.

"Being on that tour was a huge deal for me. I remember going to my first Warped Tour when I was 11. I think being there helped a lot of people understand where I was coming from musically. What I also learned was that a lot of the metal dudes that were also on the tour loved rap so much. They would be like, 'Come check out these beats I made!' It was awesome to see that," says MGK.

He tells Noisecreep about a certain nu-metal anthem he and his touring band covered during his Warped Tour appearances that always fired up the crowd. "We did Limp Bizkit's 'Break Stuff' and by the end of the tour, Levi [Benton] of Miss May I would come out and do the screaming parts with me. I also had Jaime [Preciado], the bassist from Pierce the Veil, also come out and play it with us. It was a great mash up of styles. You see a rapper on stage and then you hear the opening riff of 'Break Stuff.' Kids were shocked, but they went crazy in the pit after we started. The guys in my band were worried about playing that song, but I knew it would be big with that crowd."

Besides Limp Bizkit, MGK and his band cover Blink-182's 1999 pop punk classic, "What's My Age Again?" in their live show. "That's one of my favorite songs from my childhood. That was in 6th grade for me," laughs the 22-year-old rapper.

Lace Up features guest spots from hip hop stars like Young Jeezy, Waka Flocka Flame and DMX, the album also includes M. Shadows and Synyster Gates of Avenged Sevenfold on the track "Save Me."

"That was one of my proudest moments yet. I actually have an Avenged Sevenfold tattoo on my body. I remember being in the room with them when they recorded the intro and thinking to myself how good it sounded without any of the production even being on it yet. It gave me goosebumps."

Next on Machine Gun Kelly's plate is his highly anticipated Black Flag mixtape. Among the many tracks is a cover of Rise Against's "Swing Life Away" featuring guest vocals from Kellin Quinn of Sleeping With Sirens. "I told Kellin we had to cover this song, so he sent me a version he did with a producer, but I called him and said, 'Nah, we gotta do this differently.' So we did it again and it worked so well. I love his voice. We took it from an acoustic song into a more melodic rock kind of thing. I think it's beautiful." 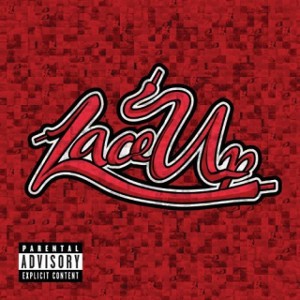