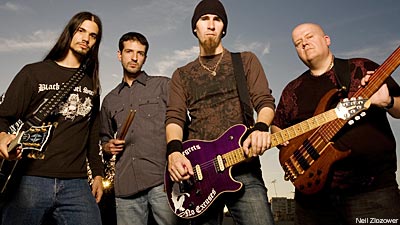 California instrumental rock band LoNero have coined the phrase 'guitarcore' to describe what they are doing. In a word, guitarcore is about the song, rather than a self-indulgent, masturbatory solo. "Guitarcore is also about the groove," Bill Lonero told Noisecreep. "It's about rhythm and establishing a pocket. Instrumental has always been about showing off and self-indulgent guitar solos.

"There are so many people out there that love the sound of the guitar but have no interest in hearing someone jack off for 20 minutes. They don't care how fast you can play or how many arpeggios you know and all that s---. They want to hear the guitar tell them a story. They want the guitar to speak to them. That's what we set out to do every time we play."

With their last album, 'Relentless,' the band enjoyed a month of promotion from Apple Computers, where they were featured on a QuickTime player, exposed guitarcore to an audience beyond LoNero's fans. LoNero is adamant that the band will never use a vocalist, not even for a single song. "Amazingly, we get people that send us lyrics that our songs have inspired them to write, which is great. Because the whole point of this band from the beginning was to write songs that can inspire people to hear lyrics."

The band is currently in the studio recording their next album, which Lonero said is heavier than its predecessor. "We've got not only plenty of guitarcore on it but also some punkstrumentals, which is another term we've coined." According to Lonero, 'punkstrumentals' are just what they sound like: punk songs with no vocals.

"I'm a huge fan of Social Distortion, and these songs are a nod of respect to them," the guitarist said. The band is working with Michael Rosen, who has worked with everyone from Metallica to Santana to Joe Satriani to Testament. "It's great to have an extra set of ears to listen to the songs that has no other interest than making a great album and that's what we're doing right now," Lonero said.

"There are a few songs on the album that are a nod also to James Dean. Songs like 'Little Bastard,' 'Eden' and 'Giant' are my way of paying tribute to one of the greatest actors of all time and really the first real rebel. He did what he wanted, when he wanted and that's what music should be about."

Lonero said his favorite part of playing isn't the riff or the chord. "I just love the feel of it, the sound of it and being able to express myself without words," he said. "No other instrument can achieve the expressionism that a guitar can. You can't bend notes on a piano. I love when I come up with a new riff, and I immediately know it's going to be a song or part of a song. Or when you play it and your foot just starts tapping. That's when you know you have a good groove."