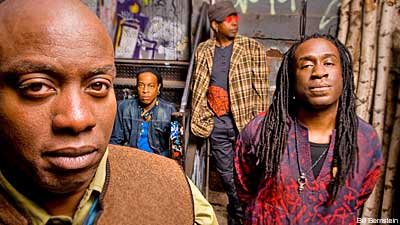 In the song 'Type,' from Living Colour's second album, 1990's 'Time's Up,' frontman Corey Glover sings about people's need to compartmentalize things in order to understand them: "Stereotype, monotype, blood type, are you my type?/Minimalism, abstract impressionism, post-modernism, is it?"

At the time, Living Colour were struggling to escape the funk-metal category they were being shoehorned into -- and battling with narrow-minded critics who couldn't understand how a band of African Americans could play aggressive rock music with strong political and social messages. Here we are, 19 ears later -- with the release of their first album in six years, 'The Chair in the Doorway,' Living Colour are still facing many of the same obstacles they felt trivialized by in the '90s.

"Even now, with this new record, you look at some of the posts on the Internet and they're about this black funk-metal band," vocalist Corey Glover tells Noiseccreep. "We're not a funk-metal band. We're just a band. We don't believe in labels and we've always tried to fight stereotypes. I listen to [light classical composer Annunzio Paolo] Mantovani, too, and if I decide to play something like that, would I be doing something that was against my so-called rock n' roll roots?"

Glover's argument is valid. While Living Colour made its mark with stadium rockers like 'Cult of Personality' and guitar-storming cuts like 'Time's Up' and 'Elvis Is Dead,' the band also experimented over the years with soul, jazz and pop. But these musical ventures were overlooked by the general public -- so much so that when Living Colour returned from a 10-year hiatus in 2003 with the sonically eclectic 'Collideøscope,' many old fans were disappointed that the record didn't deliver a more straightforward gut-punch.

"We were very much pigeonholed with that one," Glover says. "We didn't come up with some kind of definitive metal record, and all these people asked, 'Well, what exactly are they doing?' We were just doing what we do."

And that's just what Living Colour continue to do, which means making no concessions for commerciality or popularity on 'The Chair in the Doorway.' Fortunately for those of us who love it loud, the band hasn't sacrificed any of its patented heaviness for the sake of diversity.

'The Chair' is ominous and sludgy, filled with minor-key harmonies reminiscent of Alice in Chains, while 'DecaDance' rides a slow, Led Zeppelin-esque groove to a climax of sing-along vocals and guitar pyrotechnics. At the same time, songs like 'Young Man' express a new kind of heaviness infused with a near-disco beat, bubbling wah-wah guitars and electronic embellishments. And 'Bless Those' builds from a dub and blues hybrid to a volcano of Jimi Hendrix guitar flurries.

"What we're trying to say from the title on down is that anything you do is an issue for somebody," Glover says. "You're never gonna please everybody, and we're never gonna try. We're gonna be true to what we do. This record, in some regards, is harder than some of the records we've done in the past, but at the same time it's a little more eclectic. And how people decide to deal with it is up to them."