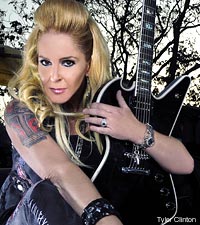 Legendary female rock band the Runaways were only around for five years (1975 to 1979), yet during that time there were more misconceptions, rumors and urban legends than there were about almost any other group. And, according to guitarist Lita Ford, the half-truths haven't come to an end.

The metal goddess has recently spoken out against the upcoming movie 'The Runaways,' which is scheduled to come out next year and stars Scout Taylor Compton as Ford, Kristen Stewart as vocalist and rhythm guitarist Joan Jett and Dakota Fanning as keyboardist Cherie Currie.

'The Runaways' is being directed by Floria Sigismondi, a photographer and filmmaker who directed 'Postmortem Bliss' in 2006 and has also directed music videos for Marilyn Manson, David Bowie, the Cure and Muse.

"I sure didn't want anything to do with this," Ford says. "They're using my name, and that makes me nervous as some of the people involved have tried to destroy my career since 1980."

Despite her uneasiness about the film, Ford has kind things to say about 20-year-old Compton, who traveled to Lake Tahoe to see one the performances on her 'Wicked Wonderland' tour.

"After meeting Scout, I feel so much better," Ford reveals. "She has a heart and soul, unlike some of the people behind the movie. She also hawks a mean loogey and really is a lot like me. We both cried the first time we spoke. Scout rocks."

Compton has similar feelings about Ford: "Lita Ford is an icon of rock and has always been a personal hero of mine," she says. "I can't wait for her to see the film. I put my heart and soul into portraying her and to find out she is such an amazing person was truly a blessing for me. It's something I'll never forget."