First appearing on the music scene as a teenaged member of The Runaways in the mid-'70s, Lita Ford has always embodied the rebel spirit hard rock was borne in. Throughout the '80s, the guitarist/vocalist's stadium-ready singles and sexy-yet-tough image helped make Ford a star on MTV and magazines like Hit Parader and Metal Edge.

In June, Ford is returning to record store shelves with Living Like a Runaway, her best solo collection since her 1988 smash Lita album. Noisecreep recently had the honor to sit with the singer at The Grafton hotel in Hollywood to talk about the new album and her storied career.

It seemed like the ideal location for a Lita Ford interview since she's so synonymous with the Sunset Strip and its rich rock 'n' roll history, but the singer reminded Noisecreep that she wasn't even born in the States: "Yeah, a lot of people think I'm originally from here, but I was actually born in London, England and my family didn't move to the Los Angeles area till I was in the second grade. Even though I wasn't born here, I definitely still consider myself a California girl," said the 53-year-old rock queen.

Noisecreep reminded Ford about the advice column her mom, Lisa, wrote for the folks at RIP Magazine: "Wow, that's right! She was the best. My mom was my biggest fan. She never asked me where I went, or what I was doing, or who I was doing it with. She trusted me. My mom knew everybody. I remember she had a really thick Italian accent and she would say stuff like [puts on an Italian accent], 'Ah, that Alice Cooper. He's really nice. I like him a lot!'

"She was awesome. We lived by the Long Beach Arena and everyone would come to my house after the shows to hang out. My mom had to be at work at 4:00AM, so she would leave at like 2:30AM in the morning, just when I was coming home for the night. I would be reeking of cigarette smoke and alcohol and she wouldn't bug me about it. I was having such a great time back then. It was the '70s in Southern California. But yeah, mom was so open-minded about me and the stuff I was into," Ford remembered. 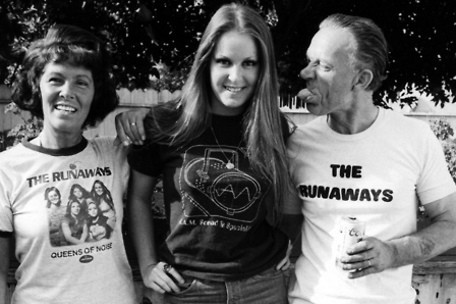 Lita then told us a touching story: "I loved hanging out with my mom. I remember my solo band was out on tour with Bon Jovi in Italy and I took my mom with us. She was Italian and her dream was to see me play Rome. One of her sisters lived in Rome and the other in California, so I took her to Rome too so they could all be together. Little did I know that my mom and one of her sisters would die soon after that. The youngest sister died in August and my mom passed away in October at the age of 67. I just feel good that I got the chance to have them all be together with me in the country they were born in. That was a special day for me."

Stay tuned for more from out afternoon with Lita Ford. Living Like a Runaway will be out on June 19 via Steamhammer/SPV. Catch her on tour this summer with Def Leppard and Poison.