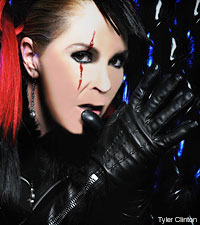 Lita Ford is back with 'Wicked Wonderland,' her first new album in 14 years. During her 'hiatus' from the business, Lita kept busy as a wife and mother. Now that she's back, she's ready to make her career a family affair -- literally. Husband Jim Gillette of the band Nitro and their two sons James and Rocco will accompany Lita on tour. The boys are also interested in the family business.

"James and Rocco can both sing, and James plays guitar. Rocco's starting to play drums, but I think he'll pick up the guitar too," Lita proudly tells Noisecreep. "They've been training to fight in the UFC since they were two years old! Be pretty awesome if they do both! Jim and I would love to see them walking to the octagon to their own song!"

Soon, Lita will tour behind 'Wicked Wonderland' with Queensrÿche. 'With' being the operative word here.

"I think it's going to be great! Queensryche is an incredible band, and I'm so happy to be a part of this upcoming tour," admits Lita. "Yes I'm playing right in the middle of their set with them! They'll be my band!"

'Crave' is the first single from 'Wicked Wonderland.'