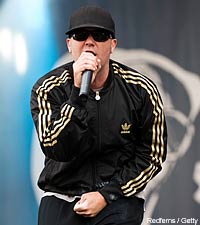 'Gold Cobra,' the band's comeback LP, is slated for release sometime this year, although no date has been set in stone yet. The reunited rockers have spent months working on the new material, and according to frontman Fred Durst, the record is in the bag and that the mix should be finalized within the next few months.

This week, Durst revealed a tentative track listing for 'Gold Cobra,' and if the track titles are any indication, this new record won't stray too far from the Limp Bizkit formula. Durst claims the disc could have 18 cuts, including 'Douchebag,' 'Loser,' 'Middle Finger,' and 'Venomous (LBGC).'

Other tracks on the LP include 'Why Try,' '90 To 10,' 'Rock Ship,' 'Brand New Meaning,' 'Shark Attack,' and 'Darkside of the Moon;' there's no word yet on whether the latter is a cover of the Pink Floyd classic. The disc will also feature 'GFY,' 'Walking Away,' 'Dance Floor,' 'Back Porch,' and 'Angels.'