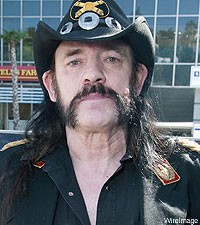 Motörhead frontman Lemmy Kilmister is an unquestioned icon in the metal scene, beloved by his peers like Ozzy Osbourne and idolized by those that came after him, including Slash and Foo Fighters frontman Dave Grohl. In fact, all three are among the many artists who extol the greatness of Kilmister in the upcoming documentary, 'Lemmy,' which premieres March 10 as part of the South by Southwest Film Festival.

While a lot of artists would either be flattered to be the subject of a documentary or kill for the notoriety a film bearing their name will bring, Kilmister is highly unimpressed he told Noisecreep. "I just think it's funny. You have to keep a sense of humor about this s---," Kilmister says of the film. "You really can't believe in it, 'cause then you become an a--hole. I don't believe a word of it. It's all s---."

Is he the least bit moved? "It's very nice, lots of people I really like being really nice about me. [But] I don't believe the premise. I've got these great shirts being done for the film premiere. It says, 'Lemmy,' drawing of me I did, 'Movie star,' and then on the back it says, 'Ha, ha, ha.'"

Sitting there listening to all of these people talk about how great he was, was there anything that stood out to him in the tributes, though? "They seem to think I was a nice guy. I don't understand it," he says joking. We know he's a nice guy, but if he does have to change any misconceptions about himself after the movie opens, he's prepared. "Well, I change them every time I meet someone. They all think I'm a dumb gorilla with a leather jacket. Now I'll be a nice gorilla."

Kilmister is a hard guy to impress. We spoke at the press conference for the Revolver Golden Gods awards, where he'll receive a lifetime achievement award presented to him by Grohl on April 8 at Los Angeles' Club Nokia. But he wasn't blown away by that honor, either. "The thing is, I haven't lived my whole life yet, so I don't know if I've achieved the best thing yet," he says. "It might come later, and they'd have missed out. I'll get two awards."