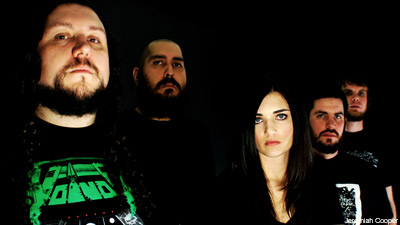 Female-fronted Phoenix metallers Landmine Marathon have revealed 'Sovereign Descent' as the title of their forthcoming Prosthetic release, which is due out sometime in early 2010. The band may hail from the scorched earth deserts of Arizona, but they're music remains influenced by metal legends who got their start across the pond.

"'Sovereign Descent' is strongly influenced by early European and British death metal with strong elements of punk and thrash," the band told Noisecreep collectively, summing up what they've achieved on the record. "Tempos vary from full onslaught blasts to crushingly slow. The guitar tones on the album are harsh and heavy without sounding synthetic and over-produced.

"All of this is topped off with Grace Perry's strongest vocal performance to date, both musically and lyrically, with lyrical themes relating to the atrocities of an oppressive society which results in its inevitable destruction."

It's no surprise that the album has that patented, British death metal tint to it, since the band has often been compared to early English Earache acts like Bolt Thrower, Napalm Death and Carcass.