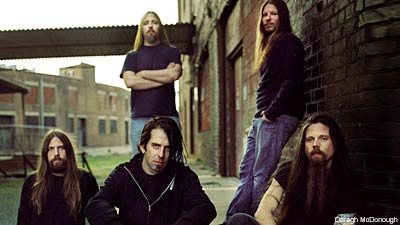 When we caught up with Lamb of God drummer Chris Adler during a brief spate of downtime from the road, he was happily spending lots of quality time with his 18-month-old daughter. "When I am not on tour, I soak up every minute I can with her," Adler told Noisecreep. "We just went to a children's museum and a Mexican restaurant the other day. I am being Mr. Mom right now. It's a little place we go, where we have a membership and she can crawl on the dinosaurs, and we sing songs about breakfast. See, I do normal people stuff! I'm not out there sacrificing goats!"

Adler's daughter has attended a few Lamb of God shows in her very young life. "She has been to a show in utero," Adler admitted. "And she has been to one show since she was born. She has been to several sound checks, and she sits on the drums and hits 'em. And she has play drums, too. I am not embarrassed about it. I am proud of what I do. I have a feeling when she grows up, she will be a cheerleader into rap music, simply because you don't ever want to be what your parents are, you know? You always think your parents are lame. Or she will be into Suffocation and Necrophagist and think Lamb of God is weak; Hot Topic-music!"

Lamb of God weak? Not possible! In other Lamb of God news, the band may do an anthology of sorts, "for anyone who has only caught onto the band recently," Adler said. "We will tour all year, get home in November, take January take off, reconnect and come down to earth and work on another album."