Norway's Kvelertak is a motherfucker of a band. Picture a six-man pile-up of punk, metal, black metal and classic rock with random body parts strewn about the wreckage. They're that completely on-fire when these rock n' roll Vikings hit stage - pure Nordic conquest, baby, full of sweat, piss and vinegar. And they do it without speaking a word of English, inexplicably belting it out in their native Norwegian tongue. Their self-titled 2010 LP was an audio-kegger of an album where Thin Lizzy, Darkthrone and The Pagans duke it out and leave each other bloody.

Kvelertak had heads spinning in January, announcing their signing to Roadrunner (signing to the label after its much-lamented consolidation in the Warner Music Group). Whatever. Their Kurt (Converge) Ballou-produced sophomore joint entitled Meir (Norwegian for "More") shows no signs of slowing down as they embrace THE ROCK more so than ever. That's classic rock – played in the midst of a category one hurricane.

Noisecreep got a hold of frontman Erland Hjelvik who was willing to dish out the truth about their latest blast of gloriously blackened rock 'n' roll.

Congratulations on signing with Roadrunner! How the hell did that happen?

Good question. We talked to a bunch of different labels and it seemed like the best option. They just seemed super-stoked and really wanted to do this album so it seemed like the best choice. When I first got into metal when I was fifteen years old all the bands I listened to at the time were on Roadrunner: Slipknot, Korn, all that teenager metal stuff. Also stuff like Sepultura. It seems like most successful big metal bands have been on Roadrunner at some point. It's good that we don't have to worry about the record not being released everywhere which was the case on the last record. It's going to be fun to see what they can do with the album with the proper backing. It's crazy we ended up there but it feels right at the same time.

It really seems like they stepped out with you guys: signing an underground band that sing entirely in Norwegian. Has there been any pressure to record your songs in English?

No, luckily not. We talked a lot with the A&R guy from Roadrunner and they basically want us to do what we do. We wouldn't have signed if there were any pressure to moderate ourselves or sing in English or commercialize our music. That being said, we paid for this album ourselves and it was finished long before we signed. It would have been exactly the same music if it were on a smaller label. I think it's funny that just because we signed to Roadrunner that they're going to start controlling the music. People are worried online that we're becoming the next Nickelback, which is just silly to me.

Why do you think that you've struck a chord with fans outside of Norway? Do you think it might have to do with your live show, which is pretty over the top?

Yeah, it's the live show but it also boils down to good songwriting. There are a lot of hooks in there and we are doing something different from other bands. We bring something new to the table. We're not concerned with being the heaviest band or anything like that. We just want to write good songs and rock out. Basically we feel like of a rock band now anyway. There's more hooks on the new record and it's more dynamic. The production is way more open.

The songs on this record seem like you're embracing more of your classic rock influences anyway. Are you really named after a Ted Nugent song – "Stranglehold', which is what Kvelertak means in English after all.

No, I don't think we listen too much to Ted Nugent. There's so many different bands. Our guitarist, Maciek, who is the guy who pretty much makes all of the music, is a living music library. He listens to everything from Marvin Gaye to Beach Boys to Darkthrone to Rush. He cherry-picks all the good parts and puts it in our music. That approach seems to be working so far.

Hopefully you're not mellowing out with your sophomore album!

Eh, yeah...we're doing that too. We're both mellowing out and doing heavier stuff too.

When you play live, it's a very physical show. What goes through your head when you play?

It's just the pulse of adrenaline. It feels really primal. I just get into the pulse of the music. There's lots of testosterone in the air. We try and play every show like it's our last one and just give it everything. If it looks like we're having fun onstage, other people will have fun too.

Are there any bands you've seen that have influenced your live show?

Turbonegro has inspired us a lot. Converge. Converge is the perfect live band. They go all out when they play. Also bands in our hometown when we started out like Purified in Blood. They were super aggressive and went all-out onstage.

A lot of your lyrics are rooted in Viking and Norse mythology. That must be odd singing about those things in Norwegian to crowds that have not idea what you're talking about.

You've spent a decent amount of time in the U.S., even recording your last record at God City Studios in Salem, Massachusetts, home of the Salem Witch Trials. How would you compare Norwegian folklore to folklore to American folklore?

Norwegian folklore is inspired by Norse mythology because we have trolls and waterfall spirits and all sorts of crazy things. You don't really have kind of stuff in the U.S. In Salem, it was mostly about witches from the 1800s. I about American folklore – like Paul Bunyan and stuff – but I don't really know where it comes from.

Trolls are metal! Are they the Bigfoot of Norway?

Yeah, definitely, that's a pretty good comparison. It's the same thing I guess. People make up things that live in the dark, that you can't see at night, that they scare their children with. Actually, on the new album, I stayed completely away from Norse mythology and I just took things from the top of my own head this time. On the new one there's songs about trepanning (drilling a hole into a human skull) to release evil spirits which they did in the old days to mental patients. There's also songs like "Nekrokosmos" which is basically about an Anti-Christ figure coming from a spaceship down to the earth from a black hole to basically destroy everything. And there are also shameless anthems about being on the road. It's not really folklore based. I was really inspired by Blue Oyster Cult and Monster Magnet and black metal lyrics from bands like Darkthrone and Taake when I wrote the lyrics to the new one.

How did you like working with (producer and Converge guitarist) Kurt Ballou at God City Studios?

It's awesome. He's basically a genius. He has a great ear for how things are supposed to sound and he definitely brought out the best in us. He'll tell you if something sounds wrong to him and he doesn't let you leave with a bad take. Definitely, this time, it was a lot more comfortable compared to when we recorded our first album. We were pretty nervous. We felt pretty confident this time having played over 300 shows. 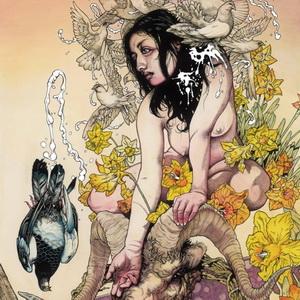 You worked with John Baizley on your artwork for this record again. Was that after the horrific bus crash he was in with his band Baroness?

Yes. This was the first thing he did after recovering from the bus crash. He really wanted to do it and of course we wanted to use him again. He moved a little more slowly on it mostly because of his injuries but he did a great job. We finally met him last time we were in Philadelphia on the tour with Converge. It was the first day he was out of the wheelchair so it was really inspiring to meet him.

Speaking of which, what is Kvelertak's fascination with owls? They're all over your artwork and merchandise.

It's really random. It just came about when we needed a cover for our first collection of demos that we burnt on a CD and sold. Out bass player came up with it and it's stuck ever since. There's not an owl on the cover this time but it's in the CD package. I wish I could tell you there's more of significance but there really isn't. Then again, we do like to stay up late, we're super-smart and we like to eat mice!

What have been some of your biggest "What the fuck?!" moments since you've been playing in this band?

Well, we won two Norwegian Grammies on the last album. We also got two million crowns of funding from Staf Oil which is a big oil company in Norway. It's a thing they have every year and we won that. The Foo Fighters wanting us to warm up for them in Oslo and meeting Dave Grohl as well as getting a gold record also. There's tons of stuff that I never imagined have happened.

You're from Norway, the home of black metal. Have you had many brushes or friends in the black metal scene? For instance, guys like Fenriz from Darkthrone who is just a fan of great music.

Eh, he hasn't. I've talked to Fenriz a couple times but I don't think he necessarily approves of what we're doing. Not that we care anyway. He's just super-strict about metal and what it's supposed to sound like. He's anal about things like the drum sound being like a certain band from the '80s. We did have Taake doing guest vocals on the last record. I have a black metal band on the side called Djevil which means Devil in Norwegian. The drummer used to play in Gorgoroth and Enslaved. He's been in lots of big bands from Norway. It's a cool thing for me to do on the side for me. For Kvelertak, [black metal] is a pretty superficial thing. We have blast beats and some tremolo riffs here and there but it doesn't go much beyond that.

Any hopes or dreams or things you want to see happen with this new record?

Not really. I just want to tour as much as possible and see what happens. As with everything, we don't think too far ahead. We just concentrate on the live show, do that the best we can and hopefully leave the audience wanting more.

Meir will hit stores on March 26 via Roadrunner Records. Pre-order the album on iTunes here.