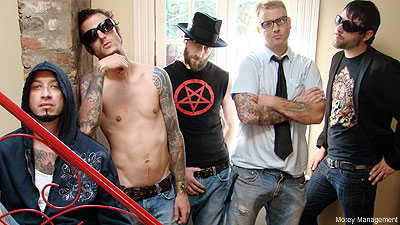 Knives Out feature current and former members of Hellyeah, Nothingface, Dog Fashion Disco and Polkadot Cadaver. If you are a fan of any of those aforementioned bands, then you'll certainly dig Knives Out. But don't take our word for it. Check this exclusive stream of the new track, 'Surrounded by Demons,' right here on Noisecreep. The chaotic, groove-driven, slightly quirky song will appear on the band's upcoming full-length, the details of which will be revealed shortly -- so exercise some patience and enjoy this song while you can.

"The lyrics were inspired by a friend of Keith Thomas, who is the drummer of Polkadot Cadaver," singer Todd Smith told Noisecreep. "A few years ago, when Dog Fashion Disco finished the 'Adultery' record, we didn't have a touring drummer so we were reaching out to some local guys to go on the road, and Keith was one of them. When his friend found out that he was auditioning, he begged Keith, for the sake of his eternal soul, to stay away from us, saying that we were all 'surrounded by demons.' That's the biggest compliment anyones ever given me! I am surrounded by demons, and they all look like Fox News TV anchors."

Listen to 'Surrounded by Demons'

Guitarist Jasan Stepp also revealed that the band's upcoming album was a collaboration, but 'Surrounded by Demons' is a song that everyone contributed to equally. "It was strange," Stepp told Noisecreep. "Everyone in the room had a little piece to the puzzle, and when we put them together, we had a song that is a great representation of what KO is all about: tons of groove, punishing guitars, legendary drumming and great melodic vocal hooks. Everyone in the band has a signature moment in this song.