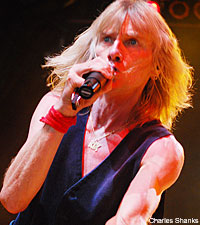 When Jani Lane canceled his appearance at the upcoming Stockholm Rock Out -- set for April 30 and May 1 at Gamla Tryckeriet in Alvik, Sweden -- promoters decided to give ticket holders two for the price of one, replacing Lane with both Kix and Great White. Great White is billing the fest as an exclusive 25th anniversary show. For Kix, the stakes are much higher. That's because the Maryland rockers have never played Scandinavia.

"I think a few other European offers have been tabled in the recent past," Kix bassist Mark Schenker tells Noisecreep. "But the idea of playing in Scandinavia was really attractive and stood out for a number of reasons, so we accepted the offer."

Schenker continued, "We all love to travel and see new places, especially if we get to perform. We also figured it was a great way to play in front of fans who probably never saw Kix back in the '80s and '90s and would probably never see us otherwise ... and we get to visit an amazing country to boot!"

In recent years, Kix have played several shows around their home turf of Maryland and also appeared at several American festivals. The band hasn't toured extensively in over a decade, and they haven't been to Europe since the very early '90s.

"We are all skinny guys with no insulation, so we're hoping for mild temperatures to keep the cold at bay just a little," laughed Schenker. "When we decided to take the offer, we found we are going to have an extra day or two of rest there and we all went online frantically looking for touristy things to do. So other than the idea of playing in a foreign country where people may know the music but have never seen the band -- which is great in and of itself -- we're guys of course, so first and foremost, we really want to see some hardcore Viking stuff! Then experience the culture, check out the local food and see the amazing vistas."

Right now, no other European dates are scheduled but the band members say they're not ruling anything out. Back in America, Kix are already booked for several festivals. There's also work on a new live album, which is significant since frontman Steve Whiteman has repeatedly told fans the chances of a Kix studio album featuring all-new material are pretty low.

"Producer Scott Spelbring and I have been working on finishing the last few mixes," explained Schenker. "We decided to divide and conquer to speed things up so he's finishing up his pile of songs he's mixing and I'm finishing up my pile that I'm mixing. It sounds incredible, it's an excellent example of the unique energy that Kix brings to every live performance and we're really excited about it."