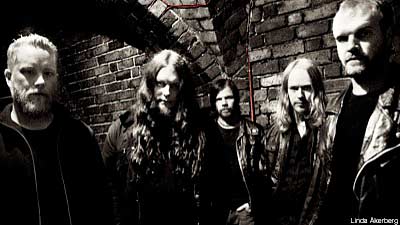 Eight is the magic number for Swedish doom lords Katatonia. The band is readying its eighth (eight?!?!) album, 'Night is the New Day,' which is due out Nov. 10 through Candlelight. Vocalist Jonas Renske wasn't precious or proprietary about the secret to the band's longevity, telling Noisecreep, "It's cliché, but it's the hunger for challenge. I don't want to feel 'done' with every album."

Stability also plays into the Katatonia dynamic, with Renske saying, "Plus, we've kept the same lineup for the last 10 years, which makes everything in the process smooth." Indeed, with a decade of solid membership at its core, Katatonia are poised to sail through eight more records in the future!

The band has a well-earned reputation for crafting dirge-like doom metal, and 'Night is the New Day' won't challenge those foundational or fundamental notions -- even though the band has evolved and developed its sound over the years.

Renske also said that he doesn't simply consider the band's sound to be solely 'doom,' saying, "We're definitely brought up on that atmosphere, even though we have naturally changed our sound through the years. In my ears, it is still present at times, perhaps more in thought than actual audio."