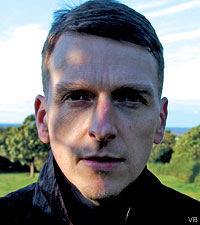 There have been so many reports and rumors on the internet in regards to who is actually recording for the musical accompaniment to the photo novel by 'Watchmen' and 'From Hell' graphic novelist writer Alan Moore and what it will sound like. The first reports on the soundtrack surfaced back in May, citing a press release from Lex Records, and said that Mike Patton of Faith No More and Justin Broadrick of Jesu and Godflesh fame had already collaborated on the soundtrack. This was kind of, in a way, maybe true.

When asked about the mix-up, Broadrick re-confirmed his involvement to Noisecreep with a "yeah" and laughed, "I'm glad you just reminded me of that actually. I should be recording that stuff at the moment, but I had just forgotten it."

Broadrick describes his involvement as "in a very minor fashion" but gives a hint to the sound of the actual score saying, "It's an exciting project but I'm just contributing the guitar textures. It's all very ethereal, quite pretty and stuff. There's some darkness but on the lighter side."

The music accompaniment for the book is being arranged by spoken word artist Adam Drucker and Andy Broder. Broader, who's band Fog have a split 7" with Jesu slated to come out later this year, was the one who approached Broadrick to bring his trademark layered sound to the project.

"The press release jumped the gun a little, I think," Broadrick stated as the culprit for the media mix up on the music to the novel. He's very hopeful that come deadline many of the other people showing interest in adding to the music will have had a chance, including the one person much of the internet chatter has been focused around, saying, "I think Mr. (Mike) Patton is going to get involved, actually. But it's still in work."