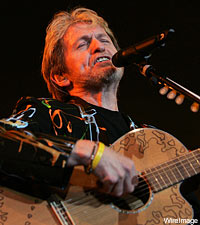 "I just love the idea of being part of the dream, part of the future," Jon Anderson, best known as the frontman of Yes, tells Noisecreep. "Everybody looks to America for some semblance of order. When I tour around Europe, people are thinking of America on such a different level this year. It's amazing. Now you say you're American, they smile. Last year, you say you're American and they walk away. Obama comes in and there is change, and it's healthy and that's why he needs everybody to get behind what he's thinking. Honestly, I think there's something very special about the guy."

Anderson doesn't just tour Europe; he was born there. This year, though, he took the plunge and became an American citizen. While Anderson is proud of his English roots, becoming American just made a lot of sense. Now, he's surprised at all the backlash against President Obama.

For Anderson, claiming his new-found country is both a sense of pride and duty. Anderson's religious beliefs are both varied and well known. He usually meditates before live shows and is quick to offer guidance, believing that music can deliver a positive message.

"You should embrace your president," Anderson continues. "You should embrace the president and give him a chance and let's see what he can do. Not knock him from day one. And actually, help change the things he wants to change. Just see how it all comes about. As far as I can see, we were left in such a mess at the end of last year, he's trying to tidy it up.

"The only way it's going to work is through love and patience and commitment to find harmony. People say, 'Jon, you're crazy! They'll come and bomb us, those Muslims!' Well, you know, it was the Christians that 'bombed' Columbine, not Muslims. Idiots who have lost their way. People who are scared, frightened and lost their way. If they see there is a way, and there is light, they will follow."

Anderson recently lent his talents to the Rock and Roll Fantasy Camp in Los Angeles alongside Meat Loaf and guitarist Ace Frehley.