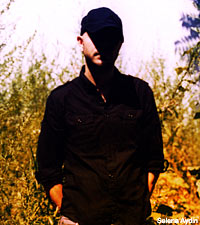 Candiria were one of the first fusion metal bands. The Brooklynites combined metal with free jazz time signatures, so much so that innovation was the band's middle name. But after a serious van accident nearly killed the band, Candiria began flying below the radar. Guitarist John Lamacchia started Spylacopa -- that's 'apocalypse' spelled backwards, minus the E, of course -- an experimental supergroup featuring Dillinger Escape Plan's Greg Puciato, Made Out of Babies' Julie Christmas and Isis' Jeff Caxide.

"Spylacopa is preparing for another release at the end of the year," Lamacchia told Noisecreep. "It will most likely be a full length, and at the moment, it will be released on my label, Rising Pulse Records, but there is a possibility of it being another EP coming out on another label."

Spylacopa's music is everyone you'd expect: manic bursts of ambient noise and chaotic, brain-scrambling beauty. "Spylacopa sounds like the sum of its parts to some degree, but pushes the members into each other's sonic territory," Lamacchia mused. "If I had to compare Spylacopa to other bands, it would be Quicksand, Jane's Addiction, Pink Floyd, Brian Eno and Refused."

As for the almighty Candiria, Lamacchia said the band has a lot of activity on the horizon. "We are gearing up for a four-volume series of releases called 'Toying With the Insanities,'" Lamacchia said. "The series will contain remixes of songs from Candiria's first three full-length records: 'Surrealistic Madness,' 'Beyond Reasonable Doubt' and 'Process of Self-Development.'"

Contributing remix artists include Dalek, Dub Trio, Dillinger Escape Plan, Kayo Dot, Friendly Bears, Rocky George and many others, which will be announced at a later date. "The series will also include new material and rare tracks never released until now," Lamacchia said, which is sure to whet the appetites of longtime Candiria fans.