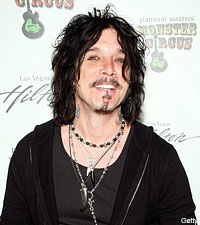 Dayton, Ohio might be a sleepy Midwestern town, but the city does see its fair share of rockers. On Dec. 3, John Corabi stopped at McGuffy's House of Rock for the first of a special three-date run to get back into playing music live. While Corabi kept mentioning he was "dusting off" songs, it was clear the enthusiasm was still present and the fire for performing was back.

Most recently, Corabi was a replacement guitarist in Ratt. Before that, he was in the bands the Scream and Union, and he also replaced Vince Neil briefly in Mötley Crüe. The show's set covered much of Corabi's career -- sans Ratt -- and also featured a section of new tunes with a decidedly country twang. Perhaps this influence comes from his new residence in Nashville?

For all the fans in the crowd -- and there were a handful who had driven multiple hours to see Corabi live again -- most wanted to hear the old Mötley Crüe tunes. Corabi made one album with the Crüe, their self-titled 1994 release. From that album, Corabi and his band performed 'Uncle Jack,' 'Til Death Do Us Part' and 'Hooligan's Holiday.' For all the years that have passed since that release, Corabi's voice isn't any worse for wear, and the live performance was scarily accurate to the recorded versions.

Another high point of the evening was 'Father, Mother, Son' from his days with the Scream. Plus, the rowdy sing along of 'Who Do You Think You Are' from the Union period. In all, both John and the crowd seemed to be having a good time.

The three show tour is a prelude to a new album, however no release date has been announced.