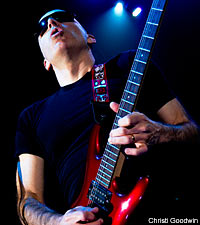 Joe Satriani's new double CD and DVD 'Live In Paris: I Just Wanna Rock' gives fans an extremely close-up look at his May 2008 Paris performance. But they're only getting part of the story. Satriani remembers the show like it was yesterday.

"Sometimes they say your memories are strongest when they're associated with adrenaline, and that would be the case with this show," Satriani tells Noisecreep. "I remember pulling into Paris that afternoon, the excitement of doing it, the weird hotel room, what I ate, the fact that my jacket got holes burned in it downstairs in the dressing room while we were doing the show. I remember the crew, the band and every song. And I wouldn't be a guitar player if I didn't remember every little note that I missed that still haunts me to this day."

Yep, even Satch makes mistakes. But while he cringes at the occasional notes he misses, he says the hardest thing of the whole process was having to see himself repeatedly. "The hardest thing about making a DVD is that you spend hours looking at it to go through the editing," he says. "I keep thinking, 'I can't believe anyone buys a ticket to look at that person.' Outside that day, it wasn't necessarily warm or humid, but the dressing room was four floors below ground level, and it was this weird subterranean thing at the theater. And when we got up on stage, I was hit with this wave of humidity and heat. Everything got soaked and saggy, and it added to the excitement of the moment, but not when you see it on film."

Satriani has loved Paris since their first-ever European tour in 1988. "[The tour] only had four shows in it, and most of them didn't go so well," he says. "There was the ill-fated Montreaux Festival, where we took the stage at quarter after four in the morning, and most people left. It was filmed, and we didn't let on to the cameras that people were walking out, so it turned out to be a good concert film.

"Then there was a show in the U.K. that maybe three people came to. But there were two shows that were over the top. One was at the original Marquee in London, and which was the best show ever. And the other best show ever was at the Elysee Montmartre in Paris. It was the first time I'd been to France, and it was the most enchanting, fantastic experience ever. I was still new to instrumental performance, and trying to figure out how you walk onstage and play without singing, and engage the audience with just melodies and solos. The love affair with Paris started with that show, and we always have a great time there."