Raiding the Rock Vault - Las Vegas is a one of kind multi-media celebration of classic rock. The show follows a compelling story told via narration by acclaimed actor Richard Malmos in front of the giant rock vault onstage onstage. Noisecreep was at the late 2012 debut rehearsal run of the show and had a blast!

The much-talked about show kicked off its one year engagement at the LVH–Las Vegas Hotel & Casino on March 9, 2013.

Noisecreep spoke with Lynn Turner about the hot new show.

Joe, We know you were part of the prototype show in Los Angeles, but what interested you most about Raiding the Rock Vault in Vegas?

I just think of how the concept has evolved since we started it as a little thing in Los Angeles. Watching it all come together, the set design, the lighting, it's really very impressive. Knowing how it started out I can really appreciate how much it's grown and so when they asked me to be a special guest I got very excited. Of course, mounting a show like this in Vegas has its challenges because there's so much going on here and so many competitive shows but so far the crowds of been really amazing.

This actual stage were you perform has some history.

I still can't believe that. It's where Elvis performed here in Vegas and the production guys will tell me as I stand there before going out, this is exactly where he stood when he went on stage. So I just stand there and feel that vibe and it's pretty amazing. Talk about rock 'n' roll history. 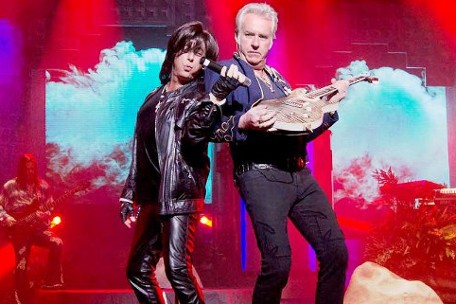 Out of all the great songs performed in the show are there a few that stand out especially to you?

I'm just a special guest now so I only get to sing a couple of songs, but I think back to doing it in Los Angeles where I could sing 'Light My Fire' by the Doors, 'All Right Now' by Free – I mean those are some of my favorite songs of all time. But now I get to sing 'Smoke on the Water' by Deep Purple, of course, along with 'Stone Cold,' the Rainbow song.

Joe, you've done a lot of different things as a vocalist throughout your career. What are some of the moments that really stand out to you?

Thank you. I'm very proud of my legacy. When I think back to playing with Rainbow in 25,000 seat arenas throughout Japan, Europe and on U.S. stages with bands like REO Speedwagon and Boston, you name it, those are all very good memories. But I think it was when Rainbow played Madison Square Garden in New York with Scorpions, that a truly special memory was created. Being from the New York-New Jersey area, the dream was always Madison Square Garden and after playing all the dives in and around the city, making it to the Garden was something really magical.

Did you have a chance check out a lot of bands growing up in that area?

The first bands I checked out were of course on television. Watching Ed Sullivan, 'Soul Train,' 'American Bandstand' – I watched everything and really absorbed it, especially the soul stuff. Yes I went to the old Fillmore East theater and saw Jimi Hendrix seven times, and Led Zeppelin and Grand Funk and Sly & the Family Stone, but I also went to see a lot of R&B bands around the city. That's the music I was really into. In fact, I was in a band called Fillet of Soul which later turned into Kool and the Gang! In addition to checking out a lot of bands, I also remember a kid that was checking my bands out a lot when I first started. He would help schlep equipment for us, he would hang out, he would do whatever we needed it because he just wanted to be in the business. He'd meet us at all the clubs and help us lug whatever we needed help with. That kid was Jon Bon Jovi and after all that, I guess he did OK for himself! 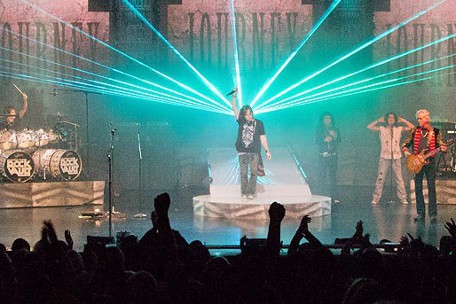 The Raiding the Rock Vault shows happen nightly (dark on Fridays) at the Las Vegas Hotel and Casino. Head here for tickets.