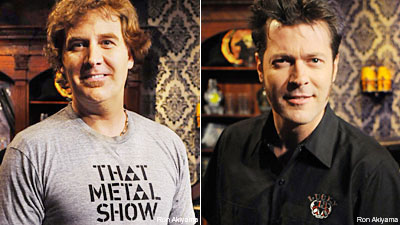 "We go on the show and act ridiculous but we are also legit metal fans," Don Jamieson, co-host of VH1 Classic's 'That Metal Show' says. He and Jim Florentine are serious, serious metal fans and told Noisecreep about their favorite metallers. "I can listen to Aerosmith and then put the new Metallica, or even Katatonia, because I am into doom metal," the comedian says, illustrating his broad taste.

"I also love Jamey from Hatebreed and Kingdom of Sorrow. I am so into it. I was in a makeup chair before our taping and cranking that CD on my iTunes. I have a soft spot for Amon Amarth, too. I walk around pretending I am a Viking," Jamieson reveals.

The funnymen have a thing for visuals with their metal, with Florentine admitting, "Don is fascinated with Pinhead from Slipknot. We stare at him the entire time. He is the best, just banging his head, with that mask with a bunch of pins. The whole concert will be over and I realize I didn't watch the rest of the band because we watched him. We love it.

We might look at Corey [Taylor] one second, then Joey [Jordison] for a few and then the Clown, but then we go right back to Pinhead!" When not transfixed by Pinhead AKA Craig Jones, Florentine and Jamieson are busy hosting their show, which also features New York radio personality Eddie Trunk and airs on VH1 Classic on Saturday nights at 11 PM ET.