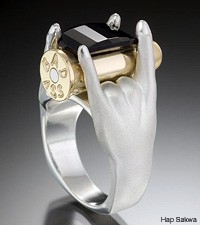 Jewelry maker and metal enthusiast Jeffrey Appling is the self-proclaimed 'Rebel of Luxury.' He's infusing bling with a thoroughly metal aesthetic. "I will eventually do a full line of metal jewelry that truly represents our enthusiasm for metal music and our relentless pursuit in being unique and separate from the mainstream and typical jewelry so commonly seen today," Appling told Noisecreep. "I will first get the 'Rings That Rock' up and running, full-force, internationally."

The line's introductory pieces are his-and-her rings, named 'American Bad A--' and 'Kickstart Her Heart.' They are luxury pieces, yet still affordable. Appling says they "fill a missing link in today's overpopulated and commercialized 'souvenir shop' paraphernalia." The rings feature jewels and hands shape like metal horns, the quintessential metal symbol. "This is jewelry that crosses boundaries and lifestyles, yet still represents our battle cry." 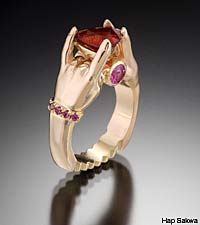 Appling's jewelry is the first of its kind, and he intends for his pieces to be difficult to make and thus difficult to copy for true, one-of-a-metal-kind fashion statements. "These rings are strategically fashioned in the best interest of not being overly mass produced by third world countries," Appling also said. "I do not make skulls, crossbones, dog tags or anything else found in today's department stores. I am a leader, not a follower of fads and trends."

Appling paraphrased (and enhanced) a quote from Sam Dunn from 'A Headbanger's Journey' when he said, "These expressive rings are just like the music: you either feel it or you don't. If metal doesn't give you that overwhelming surge of power that makes the hair stand up on the back of your neck, you might never get it. And you know what? That's okay, because judging by the millions of fellow metalheads and like-minded 'Bad A--' thrillseekers around the world, we're doing just fine without you." Amen to that!

Appling, who went to school for Gemology in Santa Monica at the height of the Sunset Strip hair band scene in the 1980s, told Noisecreep that he was into the glam scene and is now appreciating bands like Slayer and Megadeth even more. He says his life was changed by Ronnie James Dio and he's currently banging his head to Viking Skull, Static-X, Bloodsimple, Slipknot and Hell Yeah.