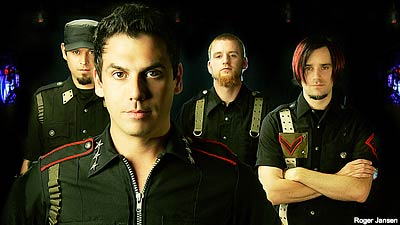 Chicago hard rockers Janus may have only just released their debut album 'Red Right Return' last fall, but the quartet has already introduced a new song to their live show. It's not an original, however, but a cover of Depeche Mode's 'Walking in My Shoes.' "It kind worked its way into the set," singer David Scotney tells Noisecreep in a confessional tone. "We started playing it out at the very end of last year, and we actually recorded a live video for it. We might go in the studio and record it."

Scotney has a bit of a soft spot for '80s bands and lists goth rock originals the Cure as an early inspiration. "We wanted to put our own twist on doing a cover," he continues. "Depeche Mode in general has a very certain sound. [Janus guitarist Mike Tyranski] had this vision to not just rock it up -- which I think a lot of bands do when they take a song from a different genre -- but to develop a totally new arrangement to translate it into a heavier format. That struck a chord with the rest of the band." No pun intended, we think. "It really feels like a Janus song now."

Don't expect too many cover songs from the artsy heavy rockers, though. It took the band forever to get this Depeche Mode one up and running. "We spent the good part of a year coming up with ideas again and again that kept getting shot down, because no one could agree on liking the same song. I've got 10 covers I'd like to do, but nobody else likes them. Each member has around five or six covers they'd like to do, too. But we just can't all agree on one song."