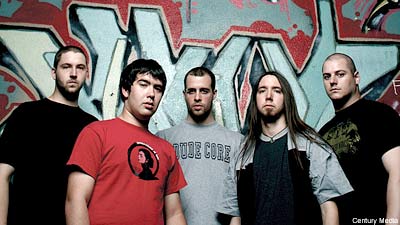 Montreal tech metal band Ion Dissonance worked pretty damn hard on their upcoming fourth album, tracking parts over and over until the passages were as solid as a temple and sharper than a scalpel. But that hardly qualifies as being 'Cursed,' which is what they've chosen to call the album, tentatively scheduled for release early this summer.

The band recorded the disc over three months at .357 Productions, and they almost ran out of time, finishing vocals and guitar overdubs at the very last minute. The album was produced by the group's guitarist Antoine Lussier, who also produced Emmure's 2009 disc 'Felony.' The album will be mastered at Wild Studios in early April.

"[That will] finally put an end to this horribly long and arduous recording process," said guitarist Kevin McCaughey. "To see the light at the end of the tunnel and to hear what we have put together is motivating as hell for us. We all had high hopes for this record and feel that we have undoubtedly delivered the goods."

'Cursed,' is the follow-up to 2007's 'Minus the Herd,' a more streamlined effort than their first two albums, and one which was criticized by some fans for being too accessible.

"I believe no matter which band you play in, you're bound to get negative comments," McCaughey told Noisecreep in January. "I can't say anyone has gone out of their way to express their disappointment for 'Minus the Herd.' There were only a minority of fans who didn't like 'Minus the Herd' compared to the others. However, many new Ion fans consider it to be the best Ion Dissonance album so far. In fact, there are more than you would think."