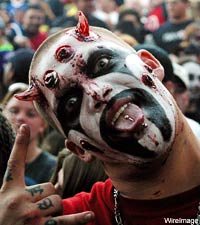 Following the murder last week of a Hazleton, Pa. man by four devotees of rap metal duo Insane Clown Posse, authorities in neighboring Monroe County have classified fans of the band as a gang. The Allentown Morning Call reports that Monroe County joins police in Arizona and Utah as recognizing devotees of the group, or Juggalos as they're referred to, as gang members. The band themselves are labeled a security threat in Wisconsin

Last Monday, Anthony Locascio, 21, was lured to the woods by four acquaintances and struck with metal baseball bats 60 to 80 times, allegedly for ratting on a friend. Jeffrey A. Gombert, 19 and Curtis T. Foose, 25 of Hazleton; Andrew A. Tutko, 19 of McAdoo and Shane D. Roof, 20, formerly of Palmerton, were all charged with homicide, conspiracy, and aggravated assault. Locascio, Gombert and Foose refer to Insane Clown Posse on their MySpace pages, while the paper cites a source close to the investigation as saying that all five involved were Juggalos.

Monroe County detective Emmanuel Varkanis has been tracking Juggalos for about two years now. He and other authorities say they've identified 1,000 Insane Clown Posse fans in the county. He says they are mostly white, range in age from 10 to 35, and speak their own language. Earlier this year, two ICP fans from Monroe allegedly lured Stroudsburg man Michael S. Goucher, 21, into the woods where they stabbed him 45-50 times with knives and metal cleavers. Both men arrested in the murder, Ian Seagraves, 17 and Sean Freemore, 18, were Insane Clown Posse fans, and Seagraves has a tattoo of the band's mascot.

Insane Clown Posse have been releasing albums since 1992. The duo of Violent J (Joseph Bruce) and Shaggy 2 Dope (Joseph Utsler) perform shows in clown makeup and describe their sound as 'horrorcore.' Many of the duo's lyrics advocate violence in an over-the-top tongue-in-cheek style, and the band's mascot is a cartoonish silhouette of a man carrying a hatchet.

Morning Call ties the lyrics of ''Imma Kill You,' a song taken from the duo's latest album, 'Bang! Pow! Boom!,' to the murder. "First I smack your head with a bat. The bloody splat, crack with impact," the song's lyrics say. The album recently debuted at number 4 on the Billboard charts, selling about 50,000 copies. The duo are popular enough to have their own yearly weekend festival, The Gathering of the Juggalos. The 10th annual gathering recently took place at Cave-In-Rock, Ill. without incident.

Many Juggalos find it preposterous to find themselves classified as gang members. "To consider Juggalos as gang members blatantly shows the ignorant and out-of-touch approach that parents and authority figures have been using to justify society's problems for decades," Haddon Township, N.J. Insane Clown Posse fan Bob Lugowe says. "These stories you read in the media are pure sensationalism, as they always choose to ignore the underlying positive message found throught ICP's lyrics, which promote brotherhood and acceptance of all walks of life."