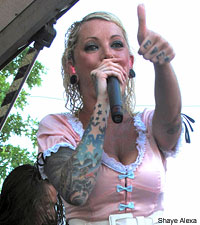 In This Moment stand out on the Warped Tour, since they are a hard rock band on a primarily punk tour. But the band is, to quote Loverboy, lovin' every minute of it. "I wanted to do this tour for a few years," vocalist Maria Brink told Noisecreep.

"We are normally involved in Ozzfest and heavier tours. We love all the tours we've done, but I always thought it'd be cool to do Warped, since a lot of these kids are young girls. At heavy shows, 90 percent of the audience is men -- yet here, it is 80 percent girls who are 15 and have never heard of us, so it is a good opportunity to meet a whole new scene and let people know who we are."

Behind the scenes, the tour is made up of seven stages, with 70 tour buses idling in the back lot, with 100 bands performing in one day. "You have to hustle and work hard, but we have been fortunate with big crowds and having a good time," Brink also said. "We thought we would wind up doing some of our not-so-heavy songs and play more melodically, but we wound up doing our heavier songs, which help separate us, so we are definitely doing a heavier set on this tour."

While the band gets 25 minutes of stage time, they blast out five tunes and then spend the day making friends and enjoying the backstage party. "It's a huge party backstage," Brink revealed. "There is a huge BBQ and dance party every night. They have a bar. As soon as the sun goes down, it's a party."

Brink maintained that she loves watching Gallows play every day, as "they are amazing and the singer is insane and performs most of the set in the crowd. They are so cool." She also admits she loves Alexisonfire, Underoath and Bad Religion, too. "I need to see Jeffrey Star but haven't yet," she said. "Have you heard of him? He is a drag queen with bright orange hair and is a super flamboyant and has dancers."

In This Moment Tour Dates
on TourTracker.com