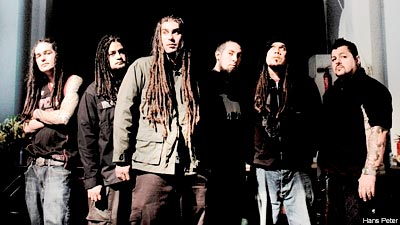 When we chatted with Ill Niño drummer Dave Chavarri, he was in Australia, awaiting the imminent birth of his daughter. "I have been wanting to be a dad for a while, and I am ready," Chavarri, who is only in Australia temporarily, told Noisecreep. "Becoming a father makes you more focused on being a better person and more keen to what your child's needs. People do change and you don't think of yourself, but for the child 24/7 for the next several years.

"I noticed me and my girl speak about it. You appreciate your parents more when you are going to be a parent. You think, 'This is what my mom went through for nine months before I was born? These mood swings and discomfort?' As you become a parent, you see what is going to happen. My parents went through a lot of s--- to raise me, so it becomes a different bond with your parents later in life."

While Ill Niño may have been off the metal radar for the past few months, having last toured America with Otep in November 2008, the band is getting ready to record a new record. "We had a great deal with our last label [Cement Shoes] until they ran out of funds when our record came out," Chavarri said. "It did OK and sold 80,000 copies worldwide, with no backup in America. We were lucky and fortunate that it had support in Europe. We just toured our asses off behind it."

Chavarri also said everyone has been writing and they will begin pre-production in New Jersey in February. "We will be there until the end of April," he said. "We will jam, add some tunes. We're starting with 20 songs and will write 20 more and then take the best 15 so we have variety. We are in the process of finalizing our American deal, since we have three offers on the table. We are seeing what is best for the band."