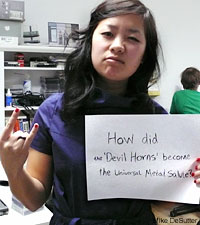 This weeks 'Ask The 'Creep' comes from Kristina, and she's looking for the origins of "devil horns" in the metal world.

Long before the devil sign was used to piss off the parents and teachers of budding Metalheads, it was used to piss off superstitious Italians, for whom the 'corna' (Italian for "horns") was either a vulgar gesture or a way to throw someone the "evil eye." Accounts differ as to exactly how the sign was adopted for Metallic purposes, but two people are generally given credit for its widespread use: W.A.S.P.'s Blackie Lawless, who says he found it in a book on the occult, and Ronnie James Dio, who borrowed the evil eye from his grandmother during his first tour with Black Sabbath in 1979. The true devil-horn pioneers, however, appear to be the proto-Metal band Coven, who throw the sign on the back cover of their awesomely titled 1969 album 'Witchcraft Destroys Minds & Reaps Souls.'